How Will Google Glass Change Filmmaking?

Glass might be revolutionary for filmmakers - by turning everyone into one. 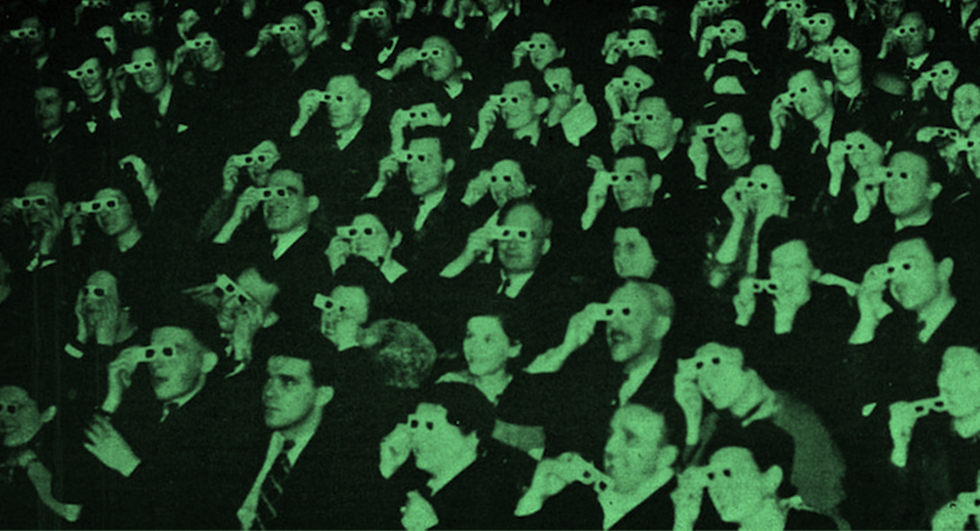 It feels like forever in hype years, but it was only last April that Google first poked at our culture's consciousness with Project Glass. A demo reel of the tech giant's headset, with a camera, microphone, and tiny screen perched over its user’s right eye, offered Google’s rough draft of augmented reality -- a first-person POV nexus for its applications like Google+, Gtalk, Maps, YouTube and, naturally, good old-fashioned search.

Google's latest push for Glass – emphasized in this past month’s showcases at TED and SXSW – not only refines but doubles down on Google’s vision of life as a movie. For starters, it looks like a movie, with its glossy, colorful, hyperconnected tableaux unfurling over a stirring pop soundtrack. But that's just marketing. Conceptually, it invites users to tuck into the growing post-cinema world where filmmaking and filmgoing are practically one in the same – where the images one creates by simply pressing “record” are framed in a live, shareable exchange. In its self-contained way, it joins the 21st-century notion that everyone is a filmmaker with the more conventionally accepted truth that everyone is an audience.

That concept may not seem especially new in relation to proven social-POV innovators like Ion, Sony's Action Cam or the GoPro Hero3. It doesn't seem especially natural, either, to the tech observers who have struggled to quantify the appeal and value of Glass's functions beyond specialized fields like construction or law enforcement. But to go hunting for the "use case" here isn't fair, because Glass is designed to do one thing, and one thing only: Navigate the Googlesphere in the real world. Everything is the use case.

Which is where the filmmaking comes in.

People watch movies for experience -- the experience of the visuals, the story, the characters and everything else onscreen. In framing these experiences within another, controlled experience, Glass will essentially make its own movies in ways that the competition so quaintly leaves up to the user. Even if Google's advertised utopia of Maps-driven ski runs and Image-guided ice sculptures doesn't shake out as something people actually want, that doesn't mean the technology won't -- or shouldn't -- capture some other, more practical Google-driven experience.

Take a film festival like Tribeca, for example. Imagine Google distributing a dozen Glass headsets to a few handpicked fans and at least one member of The National next month at the opening-night premiere performance following the documentary Mistaken For Strangers. Say you could watch it live on YouTube, where a special guest director calls the shots from a control room. Alternatively, you can choose your own views on some raw-feed livestream on Google+. A variety of this experiment was shown to work in the Beastie Boys' fascinating 2006 concert film Awesome; I Fuckin' Shot That!, sourced from 50 camcorders in the hands of fans around Madison Square Garden. Smartphones have all but shattered whatever barrier to posterity remained after that. The only remaining frontier, as far as I can tell, is the regular freedom to construct our own visual narrative from someone else's as it happens.

Let's not pretend that this isn't the world we’ve been trained to inhabit since even before Hitchcock turned voyeurism into high art.

That said, the unique POV is what sells this stuff, and its users' technical talent and narrative skill is what will ultimately reinforce Glass's staying power as a creative tool. Look no further than this week's most viral clip to see this in action: The first-person music video for Biting Elbows' song "Bad Motherfucker" (NSFW, obviously) picks up where its slightly less-viral progenitor ("The Stampede") left off two years ago, shooting and sprinting and swinging in a bloody, hyperkinetic whirlwind. In 2012 came the Israeli short Sight, which made everything from chopping cucumbers to dating a POV gaming experience. The award-winning music video for Cinnamon Chasers' song "Luv Deluxe," meanwhile, offers one of the most accessible examples of the high-concept, low-budget visual style we'll likely see Glass aficionados aspiring to before long:

Gimmick? Maybe. Silicon Valley-meets-Big Brother wet dream? Possibly! But let's not pretend that this isn't the world we’ve been trained to inhabit since even before Hitchcock turned voyeurism into high art and Michael Powell put us behind a killer’s lens in Peeping Tom, or that no one saw or could ever have seen this coming in the Google era. Starting with search and continuing with YouTube, Maps, and even last week's spiking of Reader in favor of its oracular news portal, Google has a spiritual interest in monopolizing the way things are seen. The company plays this steady imposition of its products off as a kind of magnanimity that has one consistent tech standard in mind: You. Love it or hate it, Google is not wrong about this.

Will this translate to the likes of James Cameron, Martin Scorsese, Ang Lee and other mainstream, tech-adopting auteurs joining the Glass beta-testing that starts this fall? I doubt it. (Though knowing Google, which last year had a skydiver jump from a blimp and a stunt cyclist ride off a rooftop to deliver a Glass headset to company co-founder Sergey Brin at a developer conference, anything is possible through persuasion and money.) But it will translate to a creative arms race to figure Glass out first -- its profit potential, its Star Trek-levels of awkwardness, its interactivity, and, eventually, what stories it has in it, if any.

By this time next year, you may be watching one of those stories projected from a Glass headset near you, or maybe even on you. Everyone's a filmmaker, after all.