We've banded together with some of critic friends to rank the best movies based on Stephen King's ghoulish work. 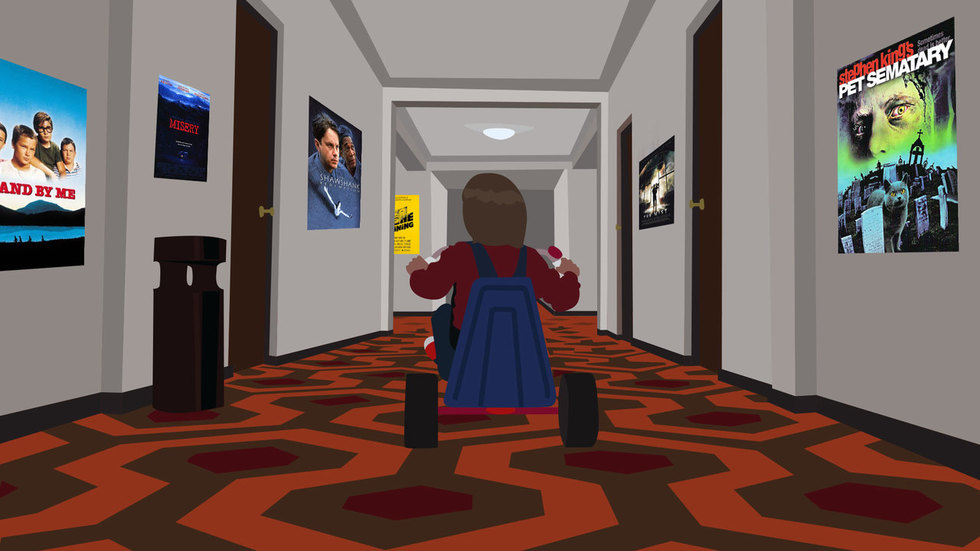 For more than 37 years, filmmakers have been dipping into Stephen King's endless well of fiction, both within the horror genre and without. Some have certainly been better than others, but ultimately, how would they all rank. We put a panel of experts to the task, asking them to rank 27 feature-film adaptations of King's work. Our panelists submitted their ranked lists and the results have been tallied to arrive at these ultimate rankings.

#20: Dreamcatcher (2003) : Alien poop-weasels terrify a group of friends in a snowy cabin. Not one of King's more delicate works, and a fairly maligned one, but it managed to attract a cast of actors like Morgan Freeman and Damien Lewis.

"Have you even seen this thing? It's compulsively watchable, yet so, so bad. Infuriating, yet hard to stop looking at." —Todd VanDerWerff

"Okay, Dreamcatcher is bloated, overly complex and the alien parts are down right stupid (let’s not even get into Morgan Freeman’s eyebrows), but I can’t help it. I like this movie. Every time I re-watch it (and I do…regularly), I find myself moved by unexpected moments of humor and friendship and by the eerie beauty of the Maine wilderness." —Karen Kemmerle

#18: The Dark Half (1989) : Timothy Hutton starred as a writer of horror fiction (a classic autobiographical tactic of King's), whose pseudonymous alter ego takes on a murderous life of its own. Also good if you have a particular fear of crows.

#17: Silver Bullet (1985): King's Cycle of the Werewolf was adapted into a film with King himself writing the screenplay adaptation.

"Gary Busey and Corey Haim fighting a werewolf together. Enough said about why Silver Bullet is so awesome." —Karen Kemmerle

#16: Firestarter (1984): Young Drew Barrymore stars as a little girl with an incendiary power.

"This is basically a TV movie, but I will defend it for days. Drew Barrymore is just so eerily blank, which I always thought was perfect for a character who barely understands her power. Plus, telekinetic Heather Locklear!" —Mark Blankenship

#15: The Running Man (1987): Based on one of the short novels King wrote under his pseudonym Richard Bachman, The Running Man stars Arnold Schwarzenegger in a futuristic vision in which criminals must fight in televised gladiator fights/game shows. Come for the proto-Hunger Games action, stay for Richard Dawson's finest screen performance.

"I was obsessed with this movie when I was a kid. It would make an amazing video game. I want it!" —Jason Adams

"FOOD RIOT IN PROGRESS! A gloriously delicious slice of mid-80s cheese, this is a legitimately terrible piece of schlock that I still somehow love very dearly to this very day. The whole film is just an excuse for Ahhhhhnold to spout off one-liners, and for that reason, it works." —Mark Graham

#14: Children of the Corn (1984): The unspoken threat of fundamentalist religion. The desolation of the American Midwest. The creepiness of children. All are put to great effect in this adaptation of a King short story.

#13: The Green Mile (1999): Oscar-nominated for Best Picture, Tom Hanks starred as a prison guard overseeing some pretty serious Jesus imagery in a 1930s Southern prison. The film, directed by Frank Darabont, is based on King's serially published novel.

#12: 1408 (2007): The age-old tale of the haunted hotel room, ginned-up with the story of a cynical writer looking to debunk haunting myths. As you might imagine, this time, it's real.

"An underrated film that would hold up much better had King never penned that other, far superior, set-in-a-hotel work, The Shining. I remember being sufficiently creeped out when I saw it in the theater, but then again, I have never felt even the slightest inkling of desire to ever rematch it. " —Mark Graham

"I may be overrating this one for the effect it had on me when I first saw it when younger, but I do think the ability to make a movie this solid when it's largely confined to the inside of a car is impressive." —Todd VanDerWerff

"I got sick from anxiety watching this once. I had to leave the room and put my head between my hands." —Jason Adams

#10: Apt Pupil (1998) : Adapted from the King novella, the horror in this one is all too real, focusing on a high-school kid who becomes fascinated with Nazism, seeks out an isolated old man who turns out to be an old SS commander, and then starts killing people.

#9: Pet Sematary (1989): So much to love in this one, from Fred Gwynne’s ultimate Maine accent (“Dead is BETTAH”) to the reanimated cat and child.

"I lost sleep for a good three nights after seeing this film in the theater. To this day, I still have nightmares about Zelda and always guard my Achilles tendon while walking next to a strange bed." —Mark Graham

"The kid who played Gage (which, duh, no wonder your kid turned into a murdering zombie child) still haunts me, as does Zelda. That goddamn Zelda. It's baffling that Zelda was a subplot in the novel, much less made it into the movie. It's possibly the creepiest most unnecessary cinematic device ever." —Tyler Coates

"So many amazing moments, but really it all comes down to little Gage under the bed with a scalpel." —Jason Adams

#8: The Dead Zone (1979): Christopher Walken and Martin Sheen in a terrifying film that kind of sits slightly to the left of classically-defined horror.

"Watch The Dead Zone and you will take everything Christopher Walken says seriously from now on." —Karen Kemmerle

"I think this one is rather underrated. Nice and nasty piece of work." —Todd VanDerWerff

#7: The Mist (2007): The looooong-in-the-works adaptation of one of King’s best known short stories finally fell into the trusty hands of frequent King collaborator Frank Darabont, and it’s fantastically over-the-top (hello, Marcia Gay Harden). Try to catch the black-and-white version if you can.

"I was mixed on it at first but it’s grown on me over the years. In its moments of out-there, it captures something truly horrifying. The ending’s a problem though." —Jason Adams

"No one understands the world of Stephen King quite like Frank Darabont. The Mist is raw and visceral, leaving a lasting impression on its audience. With shattering performances from Marcia Gay Harden, Andre Braugher and the incomparable Tom Jane, the ending (which Daranbont changed from King’s novella) is beyond devastating." —Karen Kemmerle

"The world messed up by letting this movie get overlooked. Brilliant acting and a harrowing-as-hell final scene that implies liberal politics sometimes get you killed, while conservative fear-mongering might be the key to survival. It's one of the most audacious thumbs in the eye of any horror movie I can recall." —Mark Blankenship

"A lot of people thought this was grim and nihilistic. It was, but that was sort of the point. Loses points for King's frequent preoccupations with over-the-top portrayals of evangelical Christians, but there are some great scares here." —Todd VanDerWerff

#6: Stand By Me (1986): The first time that the world got to see that King’s work could be adapted into a great movie that eschews horror. One of the more warmly-regarded coming-of-age movies of the 1980s.

"Dealing with complex themes involving death, parental abuse, class differences, and friendship, this seminal coming of age story is in a league of its own. Stand by Me features moving and complicated performances from a cast of young actors under the masterful direction of Rob Reiner. One can only admire this moving film that is a key part of the cinematic legacy left by River Phoenix." —Karen Kemmerle

"I was the same age as the characters in the film when I saw this movie in 1986, and for that reason, I connected with these characters in a very intense way. So much so that Cherry Pez is still my favorite food of all-time." —Mark Graham

#5: The Shawshank Redemption (1994): Another Best Picture nominee, and a frequent populist choice for the Greatest of All Time. Work through the overhype and you’ll find a great movie regardless.

"I loved it so much that I took my wife to Zihuatanejo on our honeymoon! Sadly, I didn't see Red. I never read this short story, so for me, I don't really connect it to being a "Stephen King" project, which is maybe why I like it so much?" —Mark Graham

"I'm probably underrating this because of how much the public at large has turned it into The Movie, but it's still a really nice film, with some heartfelt performances." —Todd VanDerWerff

"Has anybody even seen this? It's surprisingly solid." —Todd VanDerWerff

"Where, I ask you, was Kathy Bates' Oscar nomination? Or Christopher Plummer's? What could be a pure revenge fantasy is instead shaded with deep, dark emotion, and I get absorbed by it every time I watch." —Mark Blankenship

#3: Misery (1990): Another terrific Kathy Bates performance—this one justly rewarded with a Best Actress Oscar. Some of the most memorable imagery in all of horror.

"Kathy Bates makes this one all by herself. Without her, it doesn't work, but who cares, because it has her." —Todd VanDerWerff

"How can a movie that brought the concept of 'hobbling' to the mainstream be anything but amazing? Played by the great Kathy Bates, the character of Annie Wilkes has become the poster child for obsession gone terribly wrong. Who knew fandom could be so disturbing?" —Karen Kemmerle

"The problem with most of these Stephen King filmic adaptations is that they cannot compare to the source material, particularly when said source material is an actual novel (versus the many novella adaptations on this list). Misery is still the scariest book that I have ever read, and as delicious as Kathy Bates's performance as Annie Wilkes is in the film is, it can't compare to the feeling of terror that still rattles through my bones when I imagine that character." —Mark Graham

"I know a lot of people think the movie goes on too long with Annie being too impossible to kill for awhile but I’m so wrapped up in it by then I’m not thinking straight. And Kathy Bates deserved that Oscar; the film teeters towards misogyny at times and only by sheer force of her will does she keep Annie one bitchly cow corn this side of human." —Jason Adams

#2: The Shining (1980): For many, this is THE scary movie. That’s what’ll happen when you get Stanley Kubrick behind the camera and Jack Nicholson in front of it.

"I can only assume that Stephen King would be mucho pissed to see this at the top of the list, but it's truly the only adaptation on the list that can be considered a work of art. No offense, SK, but #TeamKubrick for life." —Mark Graham

"This is probably the best film on this list, but it's not a terribly great adaptation of Stephen King. (I happen to agree with the author's grousing about the film's problems while still thinking it's a stunning adaptation in its own right.) So people looking for a pure King experience should head elsewhere. But all others should see this." —Todd VanDerWerff

"King hates it, and while I understand why King hates it, I don’t care why he hates it. And his assessment of Shelley Duvall’s performance is monstrously misplaced. She gives one of the great horror movie performances in this film; she is nothing less than the complete embodiment of fear at times." —Jason Adams

"A perfect thing. Okay, okay, there’s that scene at the tuxedo shop, I’ll give you that. But otherwise, a perfect thing." —Jason Adams