The award winners for TFF 2011 have been announced! Top winners include She Monkeys, Bombay Beach, The Journals of Musan and Like Water. 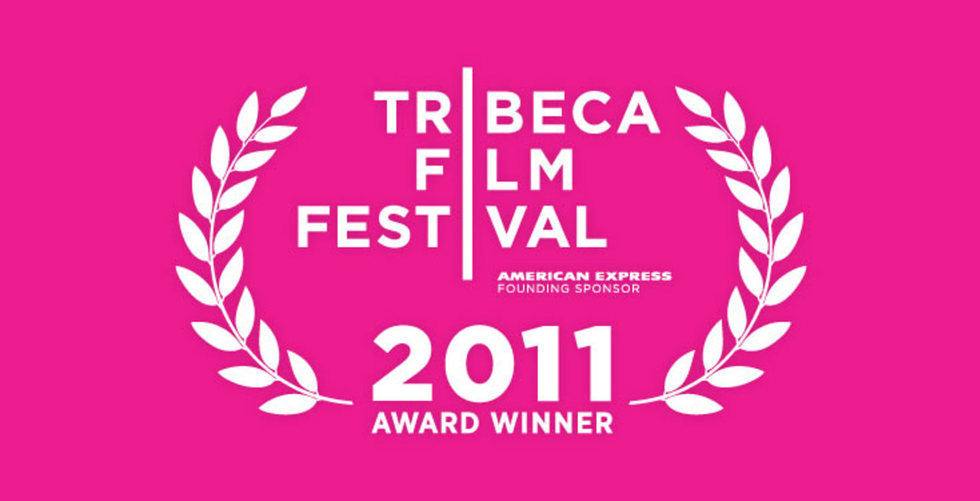 The 10th Annual Tribeca Film Festival, co-founded by Robert De Niro, Jane Rosenthal and Craig Hatkoff, and presented by founding sponsor American Express, announced the winners of its competition categories tonight at a ceremony hosted at the W Union Square in New York City. The top awards went to She Monkeys, Bombay Beach, The Journals of Musan, and Like Water.

A video archive of the Awards Show is now available for viewing.

The world competition winners were chosen from 12 narrative and 12 documentary features from 21 countries. Best New Director prizes were awarded for both narrative and documentary films, selected from all feature films by a first-time director throughout the program. Awards were also given in four categories in the short film competition. This year’s Festival included 93 features and 60 short films from 40 countries.

And for the second year, online viewers voted for the best Tribeca (Online) Film Festival awards, including Best Feature and Best Short.

The winner of the Heineken Audience Award, determined by audience votes throughout the Festival, will be announced on Saturday, April 30.

“It’s wonderful to have reached our 10th edition and to be able to celebrate with all of these gifted filmmakers. We’ve been fortunate that as we have grown we have remained a place that welcomes a diverse range of stories told by compelling and exciting filmmakers,” said Festival co-Founder Jane Rosenthal. “We are truly honored that the community has supported the Festival all these years – the community of New York and the international film community.”

“We are truly pleased to have had such a great group of filmmakers at Tribeca,” said Nancy Schafer, Executive Director of the Festival. “Audiences and juries have responded so positively to the films, and on behalf of the programming team, I thank all our filmmakers for sharing their work with us and our audience.”

In addition to cash awards and in-kind services provided by sponsors including American Express, AKA Hotel Residences, Accenture, Persol, Apple, Company 3 and Kodak, the Festival presented the winners with original pieces of art created by seven acclaimed artists, including Robert De Niro Sr. and Nate Lowman, via the Tribeca Film Festival Art Awards, sponsored by CHANEL.

Jury Comments: “Haunting, resonant, but never posed. Conventional shots become dangerous. With balanced storytelling that moves between danger and innocence, this film speaks of sex, adolescence, power, and ambition. It is original and authentic.”

Jury Comments: “There are a million colors in this complicated performance. We award this honor for bravery and fragility, and for showing tremendous range and strength throughout.”

Jury Comments: “In a world shattered by genocide, this performance was so pure.”

Jury Comments: “A beautiful portrait of landscape and emotion.”

Jury Comments: “This jury was unanimous. Hands down, this is the best screenplay.”

Jury Comments: “This film is an extraordinary study of an outcast, one that examines a complex journey with compassion and grace. The jury was unanimous in honoring this rare film, which is both emotionally arresting and an important social document. We are proud to commend this auspicious debut from an extremely talented filmmaker.”

Jury Comments: “For its audacious and experimental approach, this film speaks of recent horrors and genocide with great originality. We wanted to give a special commendation to this filmmaker for his courage and vision.”

Jury Comments: “Our unanimous award for the film’s beauty, lyricism, empathy and invention.”

Winner receives $25,000, sponsored by American Express; and the art award “Path to the Stage” by Inka Essenhigh.

Jury Comments: “The film opens up a violent world in an unexpected way through its sensitive and seamless portrayal of its complex hero, ultimate fighter Anderson Silva.”

Jury Comments: “A powerful work of investigative journalism. We honor the filmmakers' six years of hard work in illustrating how a society can clash with justice, and the impact on an individual life. Everyone should see this film.”

Jury Comments: “The winner is a film that bravely explores the residual effects of experiencing trauma in war in a truthful and fearless manner. Using a mixture of archival and current material, this timely film is the story of one man’s struggle to reconcile war, his place in it, and the legacy he will pass on to his children.”

Jury Comments: “Congratulations to a film that started in one direction and ended up going in another. This unexpected journey was well crafted and followed a unique character for whom we were rooting.”

Jury Comments: “A simply told story with great depth that examines an average day in the life of an ordinary person living through other people. We applaud this director for her focus, attention to detail, and nuanced acting.”

Jury Comments: “Characterized by bold directorial choices, this film is a disturbing and intriguing story of an actor’s struggle, and examines the price paid for realizing one’s dreams. We congratulate this filmmaker for his ability to fully realize this story in a unique structure.”

The 2011 Tribeca (Online) Film Festival winners were voted on by visitors to tribecafilm.com.