Jeanne Bowerman shares her Twitter journey, taking her from a wannabe writer to producer, screenwriter, and community leader of writers via Twitter’s Scriptchat. 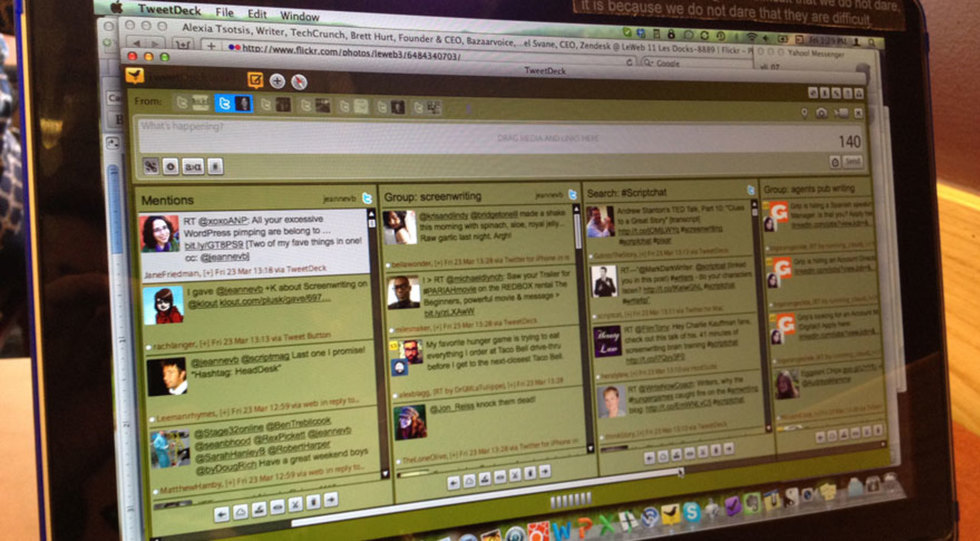 In 2009, I joined Twitter, and my life as a screenwriter forever changed.

My name is Jeanne, and I’m a tweetaholic.

Prior to my Twitter addiction, I was a screenwriter quarantined in my cluttered home office, sometimes not stopping to shower. Who wouldn’t love this job? Peace. Quiet. Creativity. Loneliness. Alienation. No money. Surrounded by a family confused by my passion for words.

Wait, this doesn’t sound very fulfilling. I was completely marooned in my country home with no support system. I needed to do something drastic.

There I was with a grungy mane, a shiny new Twitter account and no idea what to do. I timidly poked around and discovered a writing chat, #WriteChat. I gasped as I witnessed a gaggle of writers sharing ideas. There are really people out there! I started tweeting, afraid they’d disappear.

Who else could I summon from my keyboard?

I searched for screenwriters and found Oscar-winning Diablo Cody. We were either going to become best friends, or she’d block me. I was willing to take my chances. I tweeted her, and much to my amazement, she sent a quick-witted one back.  Wow. I can access anyone on this site. If only Katharine Hepburn were alive.

I was two months in, with hundreds of followers and a new blog, yet something was missing. How could I go farther with this medium?

Zac Sanford, Jamie Livingston, Kim Garland, Mina Zaher and I founded ScriptChat. Fast-forward two years, the chat now has thousands of writers plus an additional European chat. If you build it, they will come.

With a strong global community in place, we started a blog, posting transcripts and resource information. Our motto was twofold: “It’s not a competition, it’s a community,” and “bring your tequila, but leave your ego behind.”

Who said learning can’t be a virtual party.

Script Magazine, the premier script writing community, soon spotted ScriptChat and offered to sponsor us. We had arrived! When the editor wanted to meet me in New York City for coffee, I hopped on a train and away I went. It’s the most expensive cup of coffee I’ve ever had, but it’s critical to take your online community offline in order to reap the full benefits.

The editor joined my writing partner, Douglas A. Blackmon, and me to discuss our adaptation of Blackmon’s Pulitzer Prize-winning book, Slavery by Another Name. Script asked us to guest blog to chronicle our journey. That one cup of coffee and blog post ultimately led to my regular Balls of Steel column on the site. I was as giddy as a 5-year-old at Christmas.

Could this all be happening because of Twitter? While the site gives access, it doesn’t sprinkle fairy dust on people. Tweeting is laborious. In fact, it is a job.

You only get out what you put in.

Every day I watch projects birthed, sometimes from a simple tweet, asking if anyone needs a writing partner, a director, or an actor. Within minutes, queries are being tweeted and re-tweeted and connections are cemented.

My own short film, Impasse, was conceived while tweeting a play-by-play of a lovers’ quarrel witnessed at Starbucks. After the 30-minute voyeurism news blast, I had hundreds of followers on the edge of their seats, emails from two agents wanting to read my novel, and director Michael Bekemeyer asking if I would write the script for him to shoot.

We decided to use as much talent as possible from Twitter in the production. Our actress, Wonder Russell, signed on, as well as editor Eric Brodeur, who I not only met on Twitter, but also met at Sundance when two of his films were competing this year. The four key players of the project are from every corner of the United States and all met on Twitter.

While Internet access has shrunk the size of the world, our opportunities for filmmaking partnerships have grown.

It is absolutely possible to tweet to success. I’m not the only success story. Even accomplished writers likeJane Espenson (Buffy the Vampire Slayer, Battlestar Galactica, Game of Thrones, and Once Upon a Time) use the platform to build their audience and get a buzz going about new projects. Espenson launched the hysterically fun webseries Husbands and found such great success, she used the site to do a Kickstarter campaign, raising funds for the second season.

Espenson shares what attracts her to Twitter: “I love how easy Twitter is.  And the brevity gets rid of so much formulaic chit-chat. You get right down to business. And being able to tweet a link directly to content that you recommend is huge. It's like being able to hand your favorite book to a friend, only multiplied by thousands. Everyone gets to be a taste-maker. Everyone gets to, almost, schedule their own little network of content. And for those of us creating content, it's fantastic to be able to get it in front of people with one click – revolutionary.”

Bottom-line, the community of Twitter is generous. People share informative links to industry news, launch Kickstarter campaigns, cheer each other on through the dark days of being an artist, never allowing each other to give up. My Twitter followers are my life vest and the hand that always reaches back to pull me up when I need it.

My writer’s quarantine of solitude is lifted.  Twitter is my water cooler.