Home » Tribeca News » Are We Living in the Dawning of Alfonso Cuarón's CHILDREN OF MEN?
View All News

Are We Living in the Dawning of Alfonso Cuarón's CHILDREN OF MEN?

Nine years after its release, CHILDREN OF MEN remains one of the best movies of the new millennium. But today, in a volatile social and political climate, it's more alarming than ever. 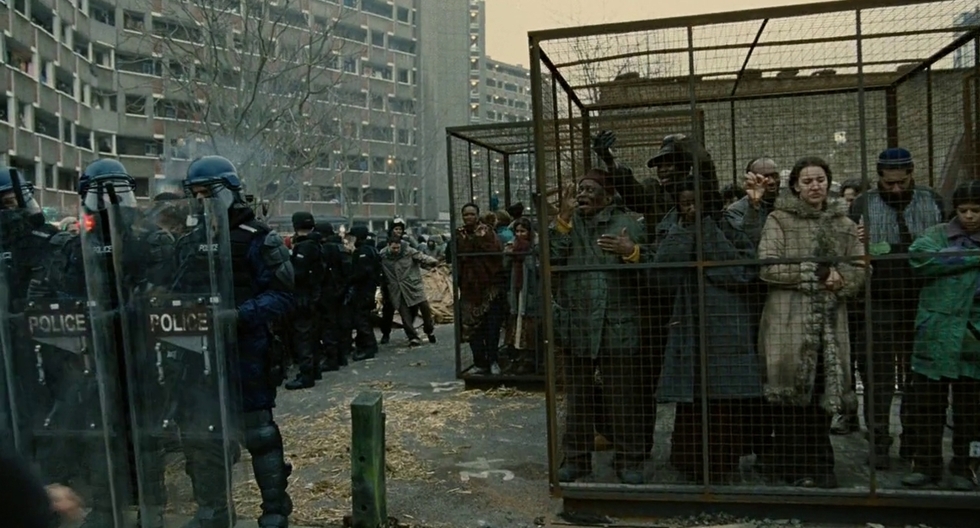 "Poor fugees—after escaping the worst atrocities and finally making it to England, our government hunts them down like cockroaches," says Jasper, Michael Caine's character in the dystopian masterwork Children of Men.

Directed by Alfonso Cuarón, Children of Men is one of the best movies of the last 10 years. The film earned rave reviews when it was released in late 2006, but it wasn't a box office hit. Made for a reported $76 million, Cuarón's film only grossed $35 million stateside and $69 mil worldwide. Perhaps audiences weren't ready for a film that spoke so damningly about the uncomfortable issue of immigration, nor one that presented such a realistic and troubling portrayal of our potential future. But now, nine years later, with the alarming international immigration crisis, the constant worldwide terrorist attacks, and endless turmoil in Middle East, the time has come again to talk about Children of Men.

The first time I saw the film was one of the most personal and emotional cinematic experiences I've ever had. Children of Men ended and I couldn't stop crying. At the moment, I couldn't understand why, but the film had left me devastated. Only later did I realize it was the frightful thought that I may have just watched humanity's fate play out on the big screen. I felt helpless. Nine years later, the world feels like it's caught in a downward spiral, and my head spins as I keep asking myself the same question: Are we living in the dawning of Children of Men?

Cuarón’s film, based on P.D. James' prophetic 1992 novel, takes place in 2027. Chaos reigns as 20 years of human infertility, followed by the extinction of children, have left civilization in a bleak and hopeless state. People from all over the world try to make their way to Great Britain, the only surviving "organized" country. Theo (Clive Owen), a cynical everyman, circumstantially helps the special refugee Kee (Claire-Hope Ashitey), who's inexplicably pregnant in an disastrously infertile society, travel to safety in the midst of a collapsing world where refugees, or "fugees," are horribly mistreated. As people with no nation, the film's refugees are positioned as the scum of society and treated with a horrible animosity. The government has no other solution but to hunt them down, detaining them in cages, holding them in camps to be deported back to the hell they escaped from. The military roams the streets for "civilian protection"; various terrorist and rebel groups fight against the totalitarian government.

Today, in 2015, 12 years away from when the film takes place, world news headlines uncomfortably channel Children of Men. "Brussels: City Faces Week on Lockdown as Hunt for Terrorist Cell Intensifies," from The Guardian; "New Rules Stall Migrants Headed for Northern Europe," via The New York Times; "House Approves Tougher Refugee Screening, Defying Veto Threat," again from The New York Times; "Russian Strikes Blamed for 400 Syrian Civilian Deaths," reported by Al Jazeera. "Those who follow the news on this continent are used to images of Middle Eastern turmoil," says BBC editor Katya Adler on the crisis in Europe. "Now they fear the chaos and bloodshed has come home here."

Our real world scenario in 2015 isn't as drastic as what's seen in Children of Men. Infertility is unheard of, camps for detained refugees resembling Nazi camps are (hopefully) inconceivable, and will/should remain so, and a Third World War is still not upon us. Still, the similarities that do exist between Children of Men's dystopian world and ours are distressing. Thousands of children, women, and men arrive on Europe's shores daily, by any means necessary, and then subsequently endure the intolerable chaos brought on by violent civil wars, totalitarian governments, and extreme poverty. Instead of a welcoming sanctuary, they're greeted by an uncertain fate and hesitant governments that see the problem as a threat to their respective country’s stability.

Absurd xenophobic declarations then begin to surface. President candidate Donald Trump recently declared, "I'm putting people on notice that are coming here from Syria as part of this mass migration, that if I win, they're going back!" Some countries make clever economical excuses to accept a minimal number of refugees, putting more stress on other countries and creating a precarious imbalance. The United Kingdom has said they will only admit 20,000 refugees in the next five years, while Germany has admitted 950,000 just this year alone. With the recent Paris attacks, some are using national security as the main concern for denying admission to refugees, like the 31 United States governors who've publicly announced their opposition to taking in Syrian refugees. Fear has begun to quickly spread to the masses, creating division within governments and prejudicial sentiments. Which historic events like the Holocaust or the unjust interment of Japanese Americans during WWII have taught us, that’s a very dangerous path.

Is it only a matter of time before we suddenly find ourselves living in a Children of Men-like world? I believe that's up to us to decide. We cannot allow ourselves to be manipulated and alarmed by the media. We can't listen to politicians with ulterior political motives who spread the fear that refugees will threaten our security and way of life. The world is changing—resistance will accomplish nothing.

In the last 15 years, there have been a number of conflicts in the Middle East with casualties exceeding the thousands, like the Shia Insurgency in Yemen, the Egyptian Crisis, the Iraqi War, and the Syrian Civil War. We were wrong in thinking that the Middle East's issues wouldn’t affect us, and now they're saying the refugee crisis is Europe's concern—when does this endless denial end? As Elif Shafak recently said in an article published by The Guardian, "Let us not forget that globalization is not only about the rise of information technology and circulation of capital, it also means that our stories, and therefore our destinies, are interconnected."

We must accept ownership before it's in our own backyard. Have we not learned anything from the past? Must there be another tragedy like Pearl Harbor or September 11 to get our attention? Or, worst-case scenario a Third World War? With all the advances in weaponry and technology the results could be catastrophic, leaving a fraction of society desolate and hanging by a thread, much like the one seen in Children of Men.

As a millennial, or, rather, as part of the most narcissistic and entitled generation yet, I look at this overwhelming chaos as an opportunity to unite and recognize the responsibility we owe to our fellow humans, be it Syrian, Sudanese, Chinese, Mexican, or French. Aristotle once said that "man is a social animal." Well, I say that both women men are social animals—we owe a responsibility to each other. Like Theo's character's journey in Children of Men, we too can wake from this eternal slumber of indifference and begin to be active in the world that surrounds us.

When I watch Children of Men today, I'm no longer riddled with helplessness. I understand it in a very different way than I had before, especially through this powerful scene. Theo and Kee walk through a refugee building under attack by rebels and the military, but at the sight of Kee's child, everyone ceases fire, uniting for a minute in awe and hope. That moment helps me begin to see through the chaos and realize that, even in the bleakest of times, there is always hope.