The 8 Creepiest Movie Characters of 2013 So Far

Have you noticed the absurd amount of movie creepers in 2013 so far? We sure have. With "You're Next" about to hit theaters, let's take a look at this year's most shudder-inducing movie characters. 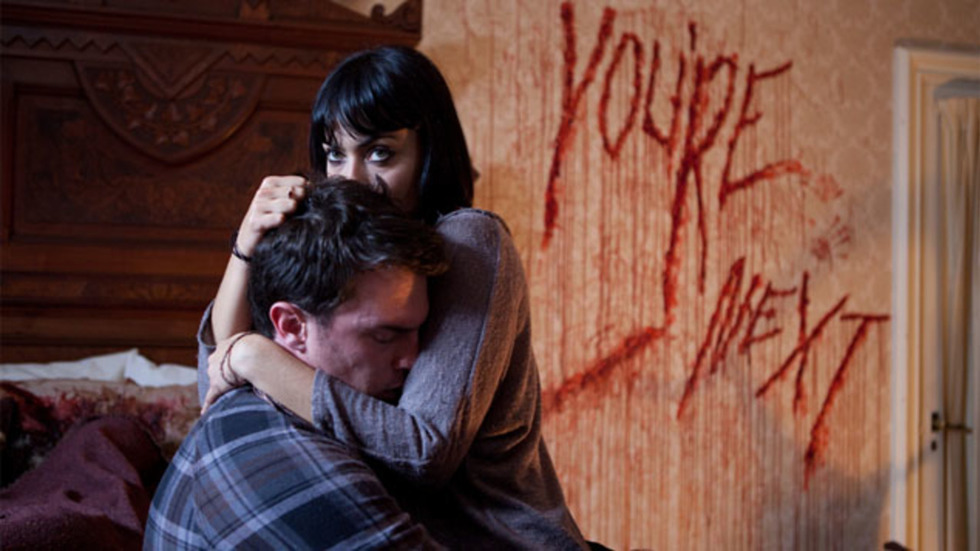 With the next super-freaky-looking horror movie ready to creep into theaters -- and seriously, those You’re Next posters with the animal masks have been haunting dreams for weeks -- we're looking at the most indelibly creepy characters to grace the big screen this year. There has been no shortage of contenders, from legit horror movies to films where you wouldn't necessarily expect to be creeped out of your skin. Our choices below...

Honorable Mention: Sally in Oblivion: By far the best thing about Oblivion was the ever-present glitchy glare of Melissa Leo as the mission-commander Sally. With questions mounting about the world surrounding Tom Cruise's character and his increasingly nebulous mission on Earth, Sally's frequent check-ins become more threatening. And of course they are, because Leo's pre-programmed, slightly-Southern chipperness are only the thinnest veil over something far darker.

#8. Michael Foster in The Call: Played by Michael Eklund, the kidnapper and killer in Brad Anderson’s zippy, crowd-pleasing film is clearly unbalanced, and thus capable of just about anything.

#7. Simon in Simon Killer: Brady Corbett's angelic face is almost always hiding something, from Mysterious Skin to Martha Marcy May Marlene to Melancholia, but in Simon Killer, that tendency reached full blossom. As an American overseas, falling down the rabbit hole of sex and petty crime, Simon's discovery of what he's capable of is truly unsettling.

#6. Emily Taylor in Side Effects: The hook of Side Effects is a catchy one: what if a psychotropic prescription drug intended as a sleeping aid could lead to you committing murder without knowing it? As performed by Rooney Mara, Emily's nightmare is a tantalizing mix of Big Pharma paranoia and good, old-fashioned femme fatale panic.

#5. Bathsheba in The Conjuring and #4. Mama in Mama: The ghosts of women haunting the grounds where they were wronged have been a big trend in 2013, and in two of the creepiest films of the year, they wreaked havoc on families of all kinds.

#3. The Polite Stranger in The Purge: This is a character who would have been creepy no matter what — a twentysomething (ugh), prep-schooler (ACK) leading a roving band of state-sanctioned murderers on a thrill-kill mission to take out a homeless black man (yeah, it's all pretty bad). But as portrayed by Rhys Wakefield and his inhumanly wide grin, one's blood really does run cold when he delivers his demands.

#2. Charles Stoker in Stoker: Matthew Goode is just too handsome. Uncle Charlie's appearance in the film comes with no end of dread because Uncle Charlie can stand at the top of a hill, cut a dashing figure, and stare at you until you start to doubt your own ability to resist doing his bidding.

#1. The Father in V/H/S/2: The "Safe Haven" segment of the horror anthology sequel (a midnight hit at this past Tribeca Film Festival) has been nearly universally acknowledged as the crown jewel, and so much of the blood-curdling joy to be found is due to the straight-faced madness of the cult leader who is so clearly up to something awful. There's no mystery to The Father, it's just a matter of when he's going to unleash his horror.