Desiree Akhavan is the writer/director/star of Appropriate Behavior 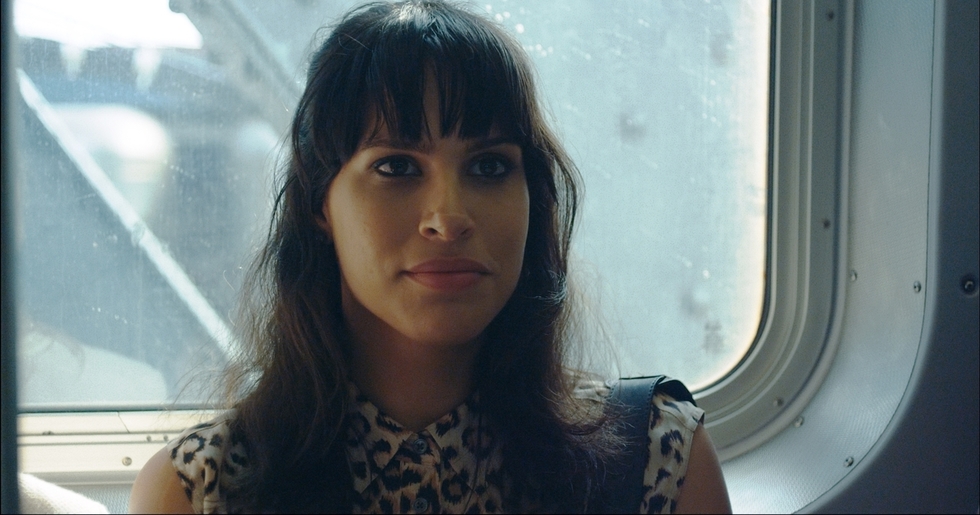 One of the breakout films at Sundance 2014 was 'Appropriate Behavior,' a picture that earned its creator the moniker of "The bisexual, Persian Lena Dunham." (Ironically, Akhavan will be featured in the cast of Girls's fourth season.) That moniker seems a bit simplistic - there are significant differences between Appropriate Behavior and Dunham's breakout film, Tiny Furniture - but there are absolutely some similarities as well. Like Dunham, Akhavan has made a film that seems to mine personal experience while simultaneously taking that personal experience to an more extreme - and comic - place, all in the name of presenting an authentic document of what living a certain kind of lifestyle feels like.

The lifestyle in question is that of Shirin, a young Brooklynite very much adrift in the world, trying to figure her life out: she's just broken up with her girlfriend Maxine (Rebecca Henderson), whom she clearly isn't over; she isn't sure what career she feels a calling toward; and to top it all off, she's still in the closet as far as her conservative Persian parents are concerned. Once its setup has been established, Appropriate Behavior takes on a compelling, dualistic narrative structure: one strand of plot details Shirin's attempts to get her life on track and become more comfortable with her identity, while a second, flashback storyline shows how her relationship with Maxine formed - before going wrong. I had the chance to speak with Akhavan recently about the film, which opens in theaters and on VOD today.

Tribeca Film: How much of the film is culled from your own experience? And what was the process like of taking material from your own life and transferring it into the realm of a story?

Desiree Akhavan: To me, it's about theme, and the themes of the film were incredibly personal. At the time that I was writing it I was heartbroken after an especially bad breakup, I had just come out to my family, and I was dealing with the aftermath of that. It took off from there. But the events in the film are fictional - I never stalked my exes, I never walked down the street with a strap-on in my hand. I never brought someone to a party to make an ex jealous. I went into a land in my head of, what are my best and worst qualities, and went from there on a kind of choose your own adventure journey in my head. I would never say it's autobiographical, also because my parents and my exes are not like that at all. I've never dated anyone like Maxine, who's a politically correct lesbian and who is a bit judgmental. I've never dated anyone like that. My family is also not cold like the family in the film is. But I had a familiar understanding of the cultures I wanted to explore.

Tribeca Film: When you're taking themes from your own life, a familiar setting, but then go somewhere new, how does that affect your understanding of your own life? Does it provide you with some perspective?

Desiree Akhavan: Not really, because at this point I see myself as someone completely separate from the character. When you work on something for years and you have so many collaborators who put so much of themselves into it, it's not even my film - I'm just one piece of a much larger pie. This is a film I made very closely with my producer, who has a story by credit. The first draft she read was just about these two characters and set in just a few locations, and she suggested I include a family. It became a fictionalized world because of the work we put into it - and that's just a script. Once you get a cinematographer you trust, you say, okay, what's his vision of the material? As a team, we made choices. So it would be strange for me to look back on this and see a version of my life - the more work that goes into the film, the less it resembles anything I've experienced.

Desiree Akhavan: I had. I co-created a web series with Ingrid Jungermann, another director I had met in graduate school. We starred in the series as well as wrote, directed and edited it. So I'd had that experience before I made the film, and that was really helpful - that led me to feel empowered to star in this. If I hadn't made that series, I don't think I could have made this film. But because that happened, it made perfect sense for me to star in this film - I was writing it for myself. But whereas before I had a co-director, this was more of a collaboration between me, the producer and the DP. My producer always had eyes on the monitor, and I always trusted that I could look to her if I was wondering about how it was looking. It was a fast shoot and I didn't always have time to look at the monitor's playback - I would usually watch it once, just to see the frame. But usually I felt pretty confident that I could gauge what was happening. Chris also picked up a lot of slack - he's incredibly smart, he understands stories.

Tribeca Film: You mentioned you worked on The Slope, the web series you made with Jungermann, and I was thinking about how I saw you at a screening of the film last week, where, during the Q&A, you mentioned you're working on a pilot. This film, too, feels quite episodic in nature. What is it that you find attractive about the idea of working in TV?

Desiree Akhavan: There are so many reasons why I'm attracted to working in TV. I was raised by TV - I was constantly watching hours and hours every day, learning about what it was like to be an American child. I was a fan of everything. The first script I wrote was a spec script of the Brady Bunch. When I got older I discovered film, and I love film, but first off, I learned that at this moment in time, I really like the idea of exploring characters for longer than 90 minutes. I would like to move at a faster pace than films allow and have more room to explore characters in a series. Also, financially, it's really hard to monetize indie film - it's a luxury, it's a game for the independently wealthy and the very lucky. I think that, fortunately, I have a sense of humor and aesthetic that lends itself well to episodic structure. That said, I have two other feature scripts I very much want to shoot.

Tribeca Film: Appropriate Behavior feels very much like a character study, especially of your protagonist. What was the process like of discovering that character's voice?

Desiree Akhavan: That's a really good question I haven't had before. You know, I love writing dialogue. I'm bad at writing synopses - for me, understanding characters is about understanding their colloquialisms, the way they like to talk. So I'll write out their dialogue in a lot of scenes, and I also literally act out each character's voice in my home - to the point where I can't work in public anymore, doing weird voices. That's how I do it - I act it out and improvise with myself.