The latest collaboration between DICK'S and Tribeca Digital Studios brings Christmas joy to an undervalued group of Alaskan teenage girls who love hockey. 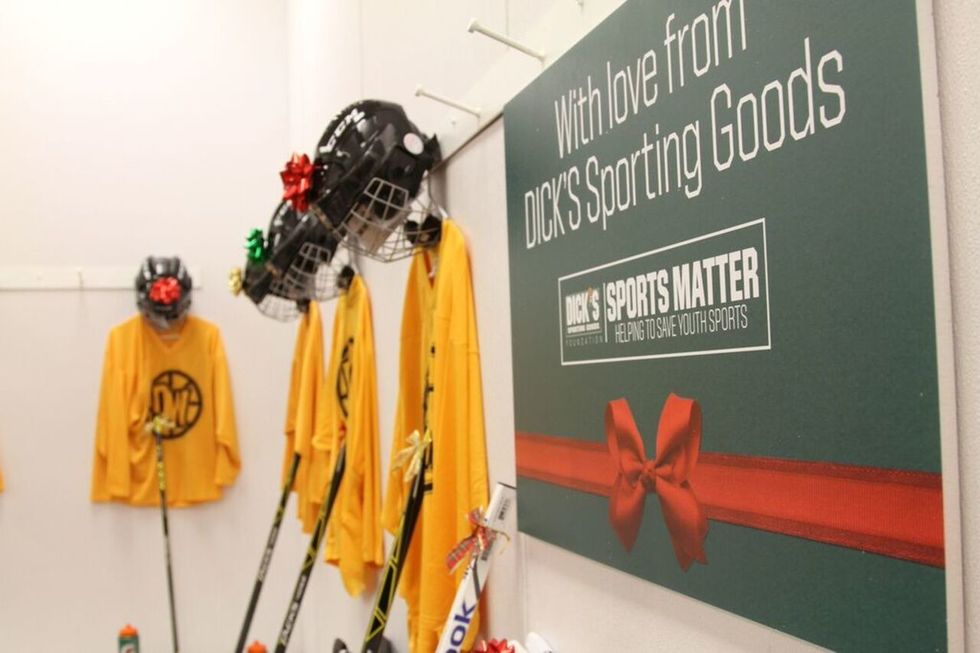 Heading into Christmas, teenage girls in Anchorage, Alaska, have found their own personal Santa Claus. Instead of a large sack full of toys, this particular St. Nick greeted several Anchorage high school girls hockey players with an oversized check for $200,000, which will enable them to keep playing hockey through 2018. The joyous occasion can be seen in A Holiday Assist, the latest joint production between DICK'S Sporting Goods and Tribeca Digital Studios. The four-minute documentary, directed by Shawn Efran, touchingly embodies the holiday spirit and exemplifies why it's so important to never overlook the underdogs.

Think of some of the greatest hockey players of all time: Wayne Gretzky, Bobby Orr, Mario Lemieux, Bobby Hull, Gordie Howe. What do they all have in common, aside from their in-game excellence? Indeed, they're all men. The sad fact is, people would be hard-pressed to name a single female hockey player off the top of their heads. Women's hockey, while cherished by the women who've dedicated their lives or at least their downtime to playing the chilly sport, isn't something we're bombarded with on ESPN or other sports media outlets, whereas the NHL is endlessly covered. This gender inequality extends to pretty much every other sport, too. On Sportscenter broadcasts, WNBA recaps and highlights happen almost as infrequently as Steph Curry slander.

Strides have been made in 2015 to rectify that. In March, the National Women's Hockey League, or the NWHL, was launched with four teams and a six-month, 18-game season. On the positive front, women now finally have a legitimate bar to strive for while slapping pucks on the ice; on the tougher side, though, each NWHL team's salary cap is $270,000 for 18 players, limiting salaries at a paltry $10,000, meaning that the players still also need 9-to-5 jobs.

The situation exists well beyond the professional level as well. With A Holiday Assist, DICK'S and Tribeca have narrowed the focus down to a specific yet universal example. Since its inception in 2003, the Anchorage school district's girls hockey program has endured through serious budgetary constraints. To help keep the city's girls' on-ice dreams alive, Alaskan hockey great Scott Gomez has used his Scotty Gomez Foundation to fix up rinks and raise the funds necessary to keep the program going.

But the St. Louis Blues star's assistance alone isn't enough. Earlier this year, the monetary pressures threatened to shut down girls hockey altogether, a drastic move that would emotionally shatter the myriad teenagers who've put their hearts and souls into the game. "When we talked to the coaches, their passion and dedication were immediately obvious," recalls A Holiday Assist director Shawn Efran. "The hockey players were amazing and inspirational. We were all surprised by how central to their lives the game had become. They lived for it, and the prospect of going without the game they loved was scary. They were afraid of losing something so central to their lives."

Thanks to DICK'S Sporting Goods, the girls have experienced a Christmas miracle. Through the company's Sports Matter initiative, which is dedicated to helping youngsters continue to realize their athletic goals, DICK'S donated over $200,000 to Anchorage's high school girls hockey program, as well as provided brand-new jerseys, sticks, and helmets. "The Anchorage hockey story is about the love that the girls have for their sport and the support of their community to do everything they can to keep the girls on the ice," says Ryan Eckel, VP of brand marketing for DICK'S. "Passion and community drive our Sports Matter program and also tend to lead to poignant storytelling. But ultimately, the Sports Matter program is about giving kids the opportunity to play, and with the Holiday Assist film, you can really see how truly important that is to the players."

To capture the big moment when DICK'S unveiled their gifts to dozens of unsuspecting girls inside Anchorage's Ben Boeke Arena, DICK'S turned to its partnership with Tribeca Digital Studios, capitalizing on the collaboration that's enabled DICK'S to tell inspirational and below-the-radar sports stories cinematically. The team-up has scored an Emmy for the critically acclaimed high school football documentary We Could Be King, directed by Judd Ehrlich; there's also a doc about U.S. Olympic gold medalist Kerri Walsh Jennings in the works with Emmy-owning director/producer Gabe Spitzer. "Tribeca is incredibly passionate about storytelling and has a deep understanding of, and appreciation for, the craft of filmmaking," says Eckel. "It's great working with a partner who has a shared belief around the potential for film to deliver tremendous cultural impact, and who can also bring extensive expertise in the process and art of filmmaking."

"Sports reveal the complete spectrum of human emotions: joy, frustration, anticipation, disappointment, fear, trust, amazement," adds Eckel. "Storytelling through film is the best way to bring those emotions to life in a way that impacts an audience. These stories are only under the radar because they've haven't yet been told, and we feel a duty to illuminate them whenever we can."

The benefits of that illumination are crystallized in A Holiday Assist. After receiving the $200,000 check, some of the girls cry, while others look stunned. Before long, though, they're all smiling, no doubt due to the joy of realizing that they'll be able to stay on the ice for another three years free-of-charge, and, more importantly, the confidence that comes from knowing that people do, in fact, believe in them. "I thought this was gonna be my last year for girls hockey," says one of the girls, fighting back tears. "I'm so thankful for for what you guys are doing. Words just can't explain how happy I am."

Making it to the NWHL someday no longer seems like a pipe dream. Even better, the girls don't have to feel inferior anymore. "The benefits that sports give to participants are profoundly powerful," says Eckel. "Student athletes are four times more likely to attend college, have 40% higher test scores, and are absent 50% less, plus sports teach teamwork, goal-setting, and perseverance. Knowing that these girls will continue to develop both on and off the ice is incredibly rewarding."

"I spent much of my life as a journalist," says Efran, "and I can only point to a handful of examples of when stories directly changed a large group of people's lives for the better. This is one of those rare instances."