One of the year's buzziest indie directors is also a history-making Tribeca alumnus. 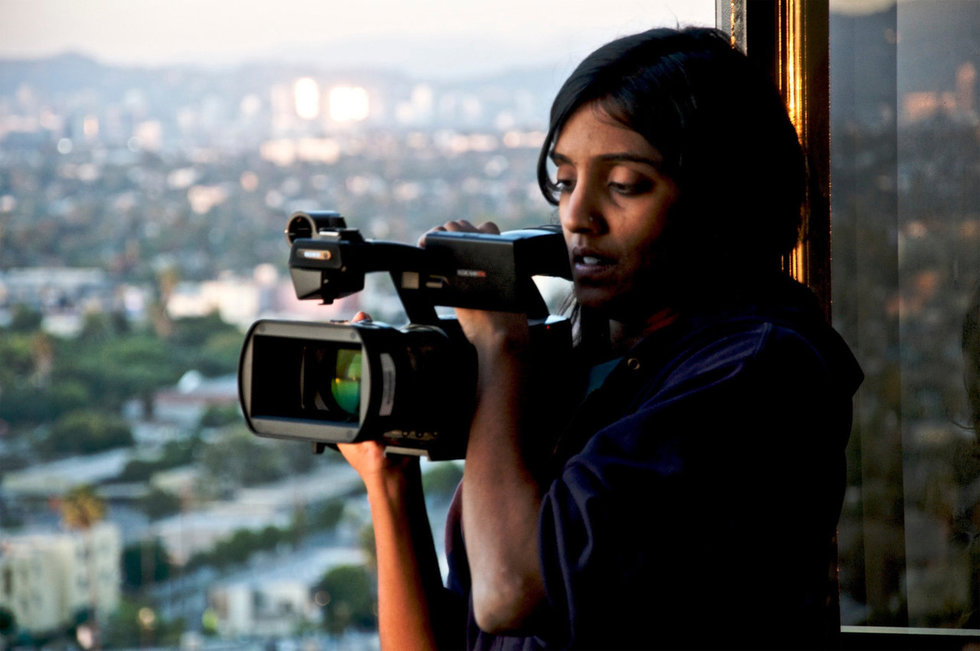 There’s a moment in Meera Menon's taut, sleek, power-suited financial drama Equity in which a shady Wall Street wheeler-dealer (played by Craig Bierko) is about to leave a covert bathroom business meeting until he suddenly catches a look at himself in the mirror and begins to examine his hair with evident insecurity. It's a simple gag that amusingly cuts down business-minded machismo to its rightfully minuscule size. It makes perfect sense within the scope of Equity: Let the men worry about their hair—the women are running this show, anyway...

After breaking out at the 2013 Tribeca Film Festival with her warm, wild road trip comedy Farah Goes Bang, which won the first-ever Nora Ephron Prize for women-made films, writer-director Menon returns to the Festival with her quietly enthralling Equity, which has been making waves as "the first woman-driven Wall Street film" and is set to screen as part of Tribeca Talks: After the Movie, followed by a panel conversation featuring Menon and other female filmmakers. Breaking Bad's fantastic Anna Gunn stars as Naomi Bishop, a vulnerable senior investment banker whose life begins to unravel amidst a brewing financial scandal and a major IPO push.

From the rivalrous prosecutor investigating the scandal to Naomi’s exasperated but deeply ambitious deputy, played, respectively, by Orange is the New Black's Alysia Reiner and Sarah Megan Thomas, both of whom conceived and produced the film, Equity is an exhilarating change of pace. Gone are the shoulder-patting wives and dizzy trophy mistresses that have plagued Hollywood's iffiest ventures into America's financial capital. It's exhilarating to see so many determined, dynamic, and quick-witted women sharing the same screen, including Gunn, who, after spending years contending with all those misogynistic Breaking Bad trolls, finally gets her own shot at playing The One Who Knocks. And she has found herself an able and adventurous collaborator in Menon, who, with Equity, fully and fiercely confirms herself as a filmmaker worth following.

We talked to Menon about Gunn and Equity, the deep significance of Tribeca and the Nora Ephron Prize, what kinds of stories she wants to tell, and the politics of embracing female antiheroism.

What did winning the Nora Ephron Prize do for you as a filmmaker?
It completely changed my life [and] in kind of smaller ways that might not be so obvious. Just for my sense of self, that gesture of inclusion gave me much-needed permission to say, "I am a director," and to present myself as a director of merit in a room with two producers who have two potential opportunities that I then was able to seek out. I had the confidence to stand up and say, "This is something I do. This is something that has been validated." It gave me permission to keep putting myself out there as someone with a voice that could do the job. So, in just that very basic way, it changed everything. And it opened up all kinds of doors. I was able to point to something and, again, with that stamp of approval, that validation from Tribeca at that moment, I was able to get people to just return my calls. [Laughs.] Which is a big thing! It was a real seismic shift in the way I experienced the industry.

And just the fact that the prize was given in Nora Ephron's memory was something so deeply meaningful to me, having grown up deeply connected to her work and being a fan of her work. I just watched the documentary [Everything is Copy] that her son made about her on HBO the night it premiered and it just reminded me of how much her work is so much a part of how I think about movies and even how I think about writing and creating smart female characters on screen. To feel connected to her in some way, through that moment, being awarded a prize in her honor, it was beyond meaningful.

After coming off the experience of helming a film that you had a hand in scripting, what was it like to work on Equity, where the screenplay already existed before you officially came onboard?
It was wonderful because I loved Amy Fox's script. When I met her and talked to her about how to engage with it and see it through based on the vision that she, Sarah, and Alysia had for it, I felt an immediate and deeper connection with her that made the process that much more gratifying. It really allowed me to have a perspective and not be precious about the material and have a focused handle on it without constantly negotiating the writing. The resources that we had to tell the story were very clear because of Amy and the work and research that she brought to it. It was very different, definitely, from making a film where I had a hand in the writing, but it was different in a way that I actually ended up really valuing.

Equity features a striking lead performance from Anna Gunn, whom I've loved since Breaking Bad but rarely see on the big screen, much less in such a commanding lead role. What was the casting process like for this film? Was there ever any pressure to go with more name-brand stars?
When Anna expressed interest in [Equity], I was a bit over the moon, being a diehard Breaking Bad fan; her work in it, in particular, was very brilliant. When I met with her, we just instantly connected. She had such an intuitive and instantly deep understanding of who this character was and why she made the choices she made. She just had that thing that directors dream of finding in an actor, which is an instant pipeline between their heart and the character’s heart. I remember, in our first meeting, I just listened to her for over an hour because she was saying everything that I had been thinking and things that I didn't even realize I had been thinking about the character. It was one of those love at first sight things that I had been looking for.

Thanks in large part to TV, we're definitely amid a new wave of antiheroes, although it's a phenomenon that rarely applies to women. Equity offers clear evidence that not only are these characters being created but that multiple female antiheroes can be featured in one film. How important was the antihero element to you?
Oh, I think it's absolutely where the heartbeat of the movie lies. It's an exploration of female characters [who] are doing uncomfortable and often unlikable things. And I think that when we see characters like that on screen, we're very used to seeing male actors play all these different shades. But I think that part of expanding and diversifying what's possible for the types of female characters we see on screen is being willing to engage with this idea of an antiheroine, with this idea of a leading female character making choices that we're not quite sure we can get behind and understanding why she makes those choices. It's about figuring out how to get more interesting female characters onscreen and being willing to let them be a little bad.

When it comes to feminist filmmaking, I always find it interesting how the term "strong female character" can mean two very different things to different people. For some, it's moral, clean, Norma Rae-ish characters, but for others, it can mean characters as complex and dynamic as the ones men get to play. What's your take on this?
"Strong" is kind of a tricky word because it's not necessarily what I personally am looking for but it's what other people are looking for in those female characters. I think they’re just looking for female characters that are making active choices. So much of the history of film has relegated women into roles where they are supporting or reacting to the sequence of events that have been generated or initiated by male protagonists. What I'm interested in, in terms of my feminism in film, is seeing women at the heart of the movie, making choices that impact the sequence of events… That's a very simple way of looking at it, but I think that's a simple enough exercise as it is.

Up until last year, I believe, you worked as an editor on Larry King Now…
[Laughs.] That was one of the shows I worked on. Editing was kind of and still is the back pocket skill that I rely on in order to make a living as I push forward and make a name for myself as a director.

With Equity, it definitely seems that your profile is rising, but what have been some of the challenges you've faced while working within today's independent film industry?
[Equity] has definitely given me a leg up… I definitely feel a forward momentum from this film that I think was built from [Farah]. And I think the lesson that I'm learning from the process is that it's all a slow build and, ultimately, the perspective I'm trying to keep to is one that's focused on the long game, right? I'm absolutely seeing more opportunities and conversations grow from the exposure this film is getting. But I'm also keenly aware that I got this opportunity to make this film from the first one. The first film was the product of experiences I'd had ten years before that. I'm just very aware of how all of these things can build upon one another, and that ultimately it's a matter of holding on to patience and seeing where it goes.

The respective stories and tones of Equity and Farah Goes Bang couldn't be more striking in their dissimilarities and really announce you as a director who's uniquely adept at multiple genres. What do you envision for your filmmaking future?
I think if there's one common thread between the two films, and one thing I want to continue to speak about in future projects, it's being able to tell stories from perspectives we haven't heard from. Farah Goes Bang was very much a story about three young girls [who] were trying to understand themselves and connect themselves to a sense of what it means to be American and what it means to care about what's going on in [America's] politics and explore the country as they try to figure out what [it] means to them. We were very conscious of telling a classic American story through the perspective of a first-generation immigrant girl in her mid-twenties.

Equity is a film set in a genre and setting that we've seen before but through a perspective that we haven't seen before: a female perspective. So if there's one thing that I'd like to continue to cultivate in my work, it's finding those marginalized perspectives and putting them into the center, whatever genre or tone or scale of movie that operates in. That, for me, is the fun and joy of filmmaking.

Meera Menon and other female filmmakers will discuss their experiences in the industry following a special Tribeca Talks: After the Movie screening of Equity on Tuesday, April 19th, at 6:00 p.m. at SVA 2. Buy tickets here.