Few series have ever offered such pure and perpetual joy as Comedy Central’s instant-classic, now in its third season and set to screen at Tribeca Tune In. 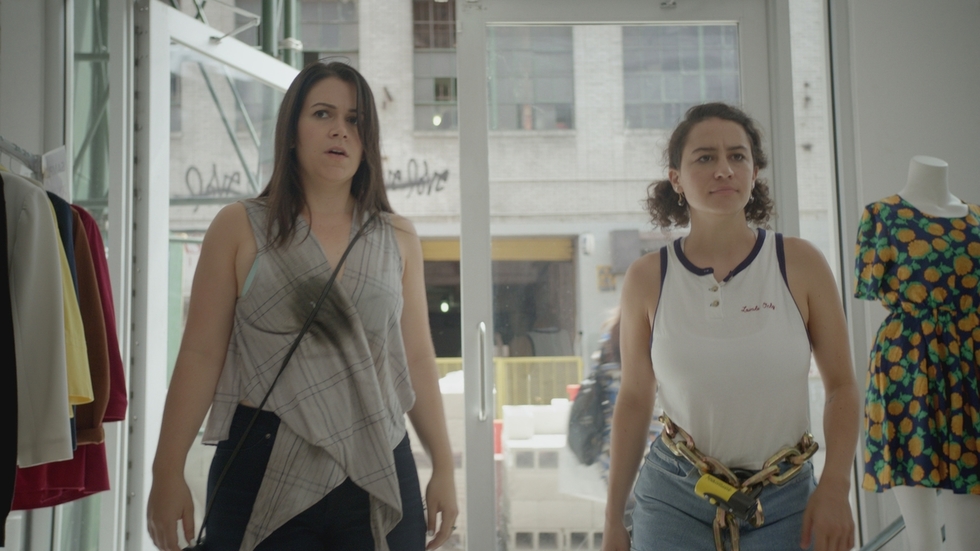 When it comes to the ongoing Golden Age of television, prestige programming seems to permanently remain a dish best—or maybe, most—served dark. And it isn’t just the dramas.

Most of those shows are great, but amid this darkly inclined television renaissance, are we running the risk of underestimating TV that, quite simply, makes us feel good? 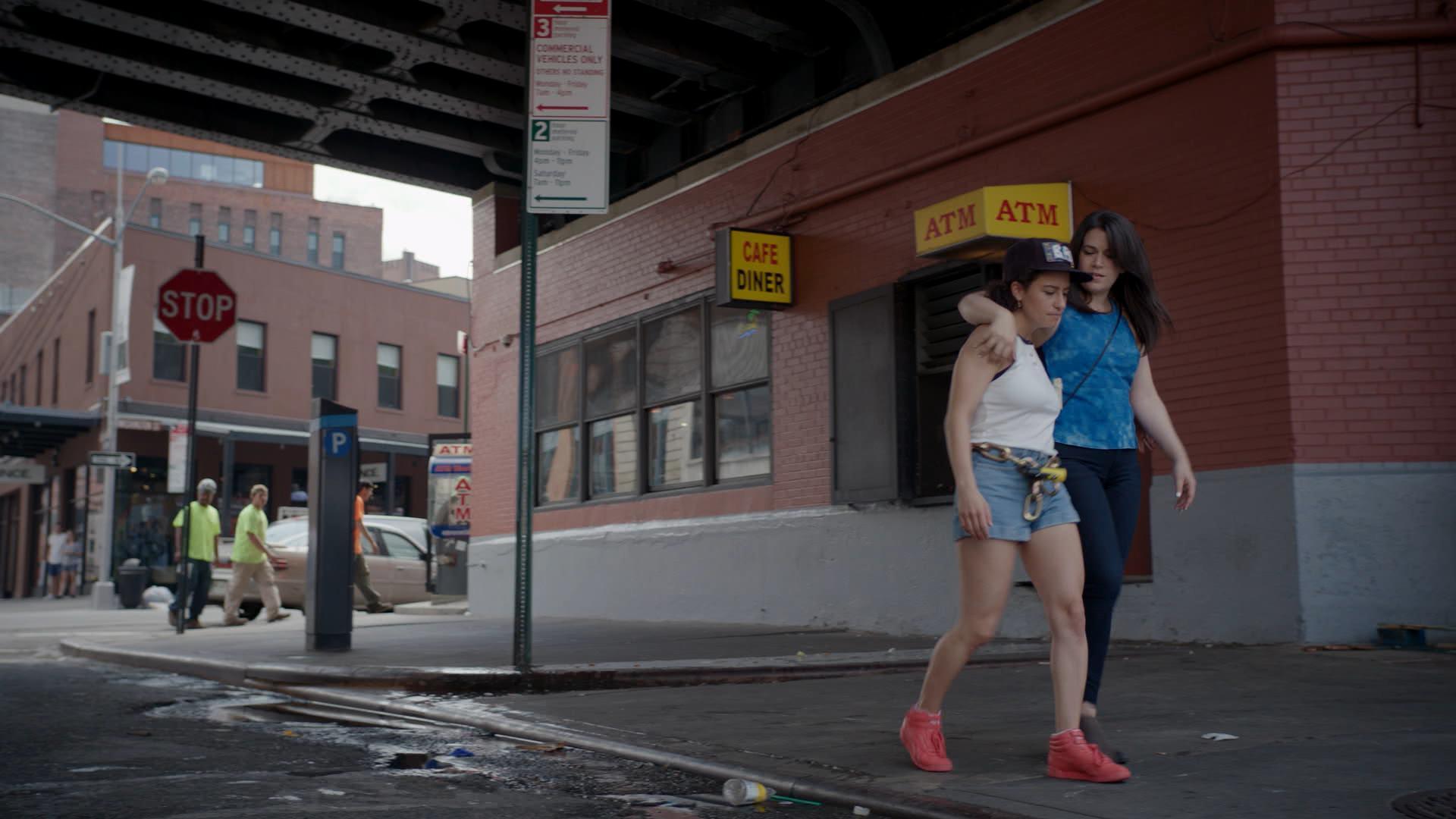 For the past three years, Comedy Central's Broad City has thawed through the iciness of prestige TV ‘s gloomy landscape with such warm, pot-flecked feel-goodery that it may just be the closest cable has ever come to a seriocomic antidepressant. Created, written by, and starring comedy's newly ordained high priestesses, Abbi Jacobson and Ilana Glazer, Broad City follows the misadventures of its creators' deeply bonded alter egos: Abbi, an awkward, would-be graphic artist who has sold her soul to the frightful fitness chain Soulstice, and Ilana, a hyperactive curlicue of a stoner who, until this season, barely held a job at the Groupon-aping start-up Deals Deals Deals, but mostly just spends her days hanging out with, amusing, and occasionally lusting after BFF Abbi.

The series is unmistakably rooted in the grand tradition of seminal sitcom gal pals. Abbi and Ilana are essentially Laverne and Shirley with student loans, Mary and Rhoda with Instagram accounts, or a fully liberated Lucy and Ethel, unmarried and unbound from the homestead but still ready to wander into all sorts of impossible comedic fuck-ups and slapstick shenanigans in a cranked-up New York City. Like their predecessors, they're hilarious performers: Jacobson is effortlessly perfecting the underrated art of cheeky insecurity on a weekly basis and Glazer remains the single most creative line-reader on television, as well as a springy physical performer whose head of curls can garner more laughs with one furious bounce than entire seasons of ongoing CBS sitcoms.

Together, the two achieve a rare and uninhibited familiarity that seems to have existed long before the two ever appeared on our screens—because it did. The two found each other at Upright Citizens Brigade in the mid-aughts before creating an acclaimed and penny-budgeted web series that served as Broad City's first incarnation. But Abbi and Ilana have also maintained more profound traits from their most obvious comic ancestresses: their gameness and wholehearted belief that any crap situation can be tackled so long as you’re in the caring and constant company of your equally struggling ride-or-die.

Such effusive affection between its central duo makes Broad City a fundamentally happy show, but its happiness isn't naive or superficial. From its earliest episode, in which our girls find themselves stealing office supplies and half-nakedly cleaning the house of a diapered man-child in order to pay for Lil Wayne tickets, Broad City furnished a highly specific tone of screwball zaniness. But look closer at this scenario and you'll see two broke girls desperately doing their best to creatively evade the realities of a terrible economy. As ever on this series, the personal is always political. The fact that Abbi and Ilana can later laugh off this demeaning setback, sans the Weezy tickets but with stolen booze in tow, doesn't diminish or gloss over their financial burdens, but actually gives the situation added depth. It establishes hopefulness as both an outlook of choice for our heroines and a personal choice that, for audiences, might be worth making more often.

This wide swath of unfettered optimism set the series apart from its New York City contemporaries, which offer credible and often compelling visions of city life that are more miserablist than mirthful. No episode of Broad City—not even the season two peak "Pegging," which involves a shiva and a breakup—has ever ended unhappily. On Girls or Louie, the loss of a job has culminated in mental breaks and season-long slides into depression; on Broad City, which is also, in part, a whip-smart workplace comedy, Ilana's overdue workplace firing leads to an ecstatic and weirdly compassionate Sister Act 2 tribute, dreamt up by a long-suffering coworker and complete with a cameo from a back-in-the-habit Whoopi Goldberg.

This disgruntled, cold-eyed coworker (Nicole Drespel) might have only been the butt of endless jokes on a lesser sitcom, which isn't to say that Broad City hasn't scored more than a few laughs from humiliating her character throughout the years. But it doesn't only humiliate her and it actually (and with much more frequency) values her as a human being who clearly nurses her own grudges and concerns. In fact, there's nary a person whom Abbi and Ilana encounter that the show's creators don't care about, which is a reflection both of their own generosity and of the rich and copious characters that New York has to offer.

In its own gently surrealist way, Broad City has become distinctly representative of contemporary New York as any series created within the past fifteen years, while generally standing head and shoulders above their peers and forbears when it comes to offering a realistically inclusive portrait of the city’s current state. With their compact apartments, dead-end jobs, and cash-strapped pockets, Abbi and Ilana may live in the same city as Carrie, Charlotte, Miranda, and Samantha, but their social circles hardly exist in the same stratosphere. Case in point: Abbi and Ilana only once step foot in the Upper East Side in order to find Abbi's phone and are greeted by a nightmarish procession of moneyed older women, exclaiming things like, "That's my tenth horse—ten horses that died this year!”

Sex and the City continues to get a lot of flack more than a decade afters its finale for doing its considerable part to cement an upscale, milky-white vision of the city that unquestionably contributed to the existence of Taylor Swift’s “Welcome to New York.” Sex and the City was always much more than just some charming fairy tale, but surely I’m not the only viewer who would have liked to see a few less Asian actors cast as silent domestics and background pedicurists during the series’ run.

Broad City is a sigh of relief. Abbi and Ilana are two millennials trying their best to stay woke, a dubious word though it may be. This inclination doesn't exclude some winking moments of unwitting cultural appropriation (like the "Latina" hoop earring that Ilana likes to wear when she's, um, feeling herself), but can also generate some particularly acute commentary, like Ilana's observation that "cops scare the shit out of me and I'm white." But there's also such a profusion of different races, genders, and sexual orientations week after week, that there's no need to keep a running count of culturally dubious stereotypes. This isn't a non-editorializing Frederick Wiseman documentary, but it's possibly the closest a contemporary sitcom has ever come to one and the many diverse presences it features aren’t merely relegated to the sidelines.

As Lincoln, Ilana's food-blogging, dental surgeon friend-with-benefits, Hannibal Buress is never simply reduced to Ilana's Black Boyfriend. Like everyone else on the show, Lincoln is just another New Yorker who has crossed paths with our leading ladies but contains eccentricities and opinions that are wholly his own. In this same spirit, Broad City is able to see New York "types" and play up their quirks without cutting them down to mere stereotypes. One of the show's strongest bit characters is the one-percenter preteen Oliver (Grayson Taylor), who becomes a smooth swindler under Ilana's supervision, even taking up the show's most famous meme-cum-rallying cry, “YAS, KWEEN!”

Glazer and Jacobson realize that, in some ways, living in New York City is a bit of a horror show, from catcalling truck drivers and sneaky street thieves to, more recently, tyrannical food co-op managers (played by Melissa Leo!) and the gentrifying rise of local neighborhood Whole Foods superstores. But Broad City isn't bent on griping about New York's transformation into a gated, wealthy isle in the way that a show like the visually similar but far more cynical Unbreakable Kimmy Schmidt does to often riotous effect. Broad City's outlook is far sunnier, and it’s this sunniness that makes its very existence sort of rebellious.

By showing two mishap-prone young women rising above adversity and almost willing New York City to deny them their right to good times, Broad City achieves something more slyly subversive than what we might expect from less ostensibly political programming. It’s a show whose episodic stories aren’t only largely created by women, but proudly depict women in active pursuit of their passions. Broad City surpasses relatability, which, in and of itself, is a shaky foundation to lay any series on, and instead offers us a new, confident model of living and learning. Such a model isn’t without its frequent stutters, but it can still lead to personal satisfaction so long as we maintain the right attitude and open ourselves up to new ways of being.

True to its name, which implies both inherent feminism and humanism, Broad City dives into as many pockets of life as it can find. It's a sweet, salty, rolling-paper-wrapped comic valentine to a city that can infatuate and infuriate from minute-to-minute. Would Abbi and Ilana have New York any other way? Maybe. Lucky for us, then, that they have created a deliriously and perfectly pleasing show for which the same claim can never be made.

Broad City's Tribeca Tune In event, complete with a screening of the third season's finale episode and an on-stage conversation, will take place inside the Tribeca Festival Hub on Sunday, April 17th, at 4:20 p.m. Buy tickets here.

Ilana Glazer will also be a part of the world premiere of Comedy Central's new miniseries Time Traveling Bong, which she co-wrote and co-produced with Paul W. Downs and Lucia Aniello. Tickets for that event, scheduled for Saturday, April 16th, at 2:00 p.m., are available here.