A creative collaboration started with a book, then became an art installation, then a short film with worldwide distribution putting communities and discussion first. 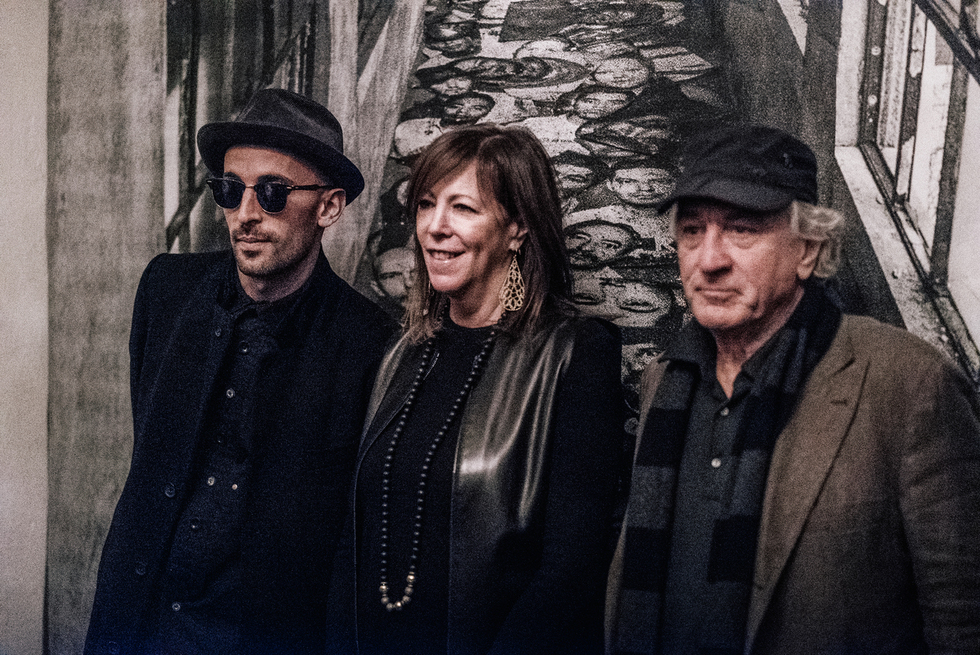 Artist and director JR's short film, ELLIS has been screened in over 800 communities over the past 2 weeks and is now partnering with Facebook for a 24 hour free preview on Thursday, November 19th. You can head over to our Facebook page to watch ELLIS in it's entirety today. iTunes will distribute the film in over 85 countries starting Friday, November 20th. We hope you will watch and share this timely film and discuss its implications worldwide. Below, learn how the film was made through a creative collaboration between JR and Tribeca.

It was a photography book gifted to JR by Jane Rosenthal that sparked the idea for ELLIS.

In the opening monologue of Ellis, the 14-minute film that looks back at the great wave of early 20th immigration in America through Ellis Island, directed by French artist JR, Robert de Niro, utters as he walks through the corridors of the Ellis Island Immigrant Hospital, “Mama left a note in my suitcase, telling me to do something that will make her proud—to be a good man.” That single line sums up the centuries old promise of America and connects the history of the island to the present day fraught understanding of immigration, globally.

“I started thinking it would be great to make a film that could document a place that will disappear forever slowly,” says JR of why he wanted to make Ellis. “I knew there was never any filming done there and I had to find a way to tell that story,” he adds. “For me it’s more the observation of the process at the time, and how America got built and how we are approaching immigration today.”

When JR first arrived to New York, Tribeca’s Jane Rosenthal, gave him Stephen Wilkes’ Ellis Island: Ghosts of Freedom, a 77 color-photograph exploration of the hospital complex where nearly one percent of the 12 million people who passed through Ellis Island were held and ultimately deemed too sick and turned away from America.

“A couple of years ago, when Jane Rosenthal gave me the book about Ellis Island by Stephen Wilkes, who actually photographed a side of the island that was abandoned and never restored, I was really fascinated by it,” explains JR. Initially, what resulted was “Unframed—Ellis Island,” an installation, featured in the film, of images of archival century old photographs of European immigrants and repurposed portraits from his Inside Out people’s art project blown up and pasted on the abandoned façade, floors and walls of the hospital.

“Immigration has always been part of our history as human beings,” says the artist whose family immigrated to France. “For hundreds of years people have been moving from one place to another. I think it was interesting to observe a place that not that long ago people had all came to build a country that we live in right now,” he adds reflecting on the installation that led to the film. “It was interesting to see the hope and sadness around making it or not making it and being so close to your goal because that little island is a few hundred meters from the coast of New York City.”

The artist says that the differences between the film and installation is that in the installation people went to Ellis Island and imagined what it must to have been like to arrive and live for some time in the hospital. “In the film the character takes you through the process of leaving a place, arriving, going to doctors, not necessarily understanding the language, and that whole process of literally changing your frame of reference to start a new life,” explains JR. “Robert De Niro captured it brilliantly by walking through there as a ghost in the film, you feel that he is still connected to the world and place and by walking with him through that space you actually discover it through his eyes—he made it feel like everyone’s story.”

The film was written by the Oscar-winning writer of Forest Gump, Eric Roth, whose family passed through Ellis Island, follows Robert de Niro as he move about telling the story of the people who once occupied the hospital longing to get to America. “I knew I wanted to tell of a story of what it was like to travel at the time and connect it to today’s situation and so when I approached Robert de Niro for this project he said, he might do it but we would need a writer to do it properly and Eric Roth was at the top of his list. I called Jane and she put us in touch,” says JR of the collaboration it took to make the film. “Eric Roth replied right away and five days later he came to Ellis Island and he was fascinated by the haunting photos on the walls and he started writing.”

To “connect Ellis Island to today,” JR is arranging free screenings around the globe and sending physical copies of the film to whoever wants to host screenings in their communities. He sees Ellis as a film that should remind us of what America—and the countries immigrating people are trying to get to around the world— freedom, and opportunity to flourish. “My role as an artist is to remind us of the humanity of people. There are people traveling and crossing borders not necessarily because they have a choice,” explains JR. “By telling this story I am trying to slightly change perceptions.”