The comedian's funny and insightful live performance reveals Minhaj's stories of growing up as an Indian-American in California. 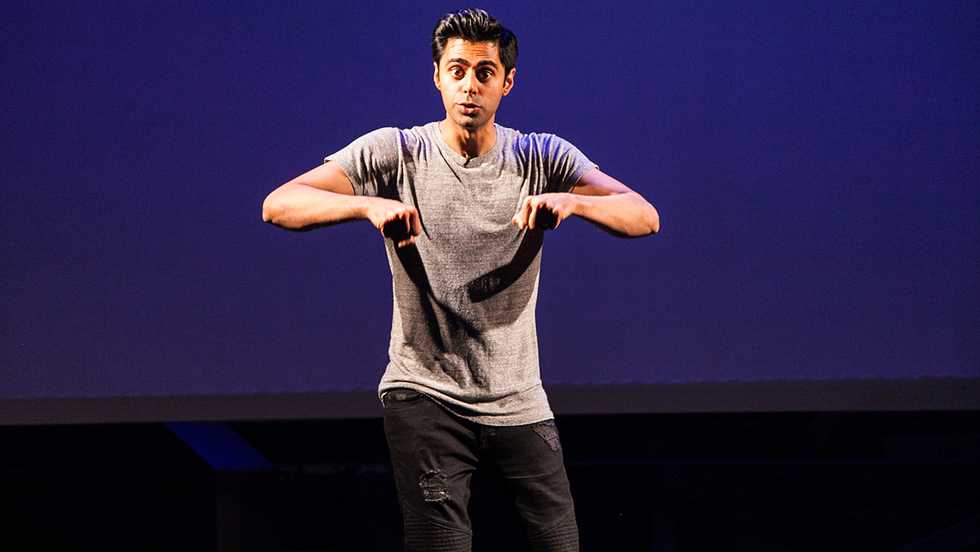 Hasan Minhaj: Homecoming King, the theatrical debut of comedian and The Daily Show correspondent Hasan Minhaj, is a hilarious and powerful exploration of the experiences of first-generation Americans. The one-man show takes true events from Minhaj's life growing up Indian-American in Davis, California. The 85-minute long series of vignettes, fueled by masterful storytelling, tracks Minhaj's coming-of-age as an awkward teenager, meeting his sister, interracial dating, racism, and, through it all, his family's quest to achieve the American Dream.

"The genesis behind this show came a few years ago at the Riot Comedy Festival, where The Moth conducted their 'StorySLAM,' and I was asked to be a part of it," explains Minhaj. "I was thinking, 'Oh, it will be like a comedic storytelling show,' The theme was heartbreak. The only story I could think of was this one story of not being able to go to prom. I lost the StorySLAM miserably but Catherine Burns, the Artistic Director of The Moth, said it was a really important story and people will really connect with it, and that I should flesh it out into something more."

Minhaj begins Homecoming King with a somber anecdote about a prom date with a white girl named Bethany Reed. As the story goes, Minhaj snuck out of his second-story bedroom window and hopped on his bike in a suit, legs spread wide so his slacks didn't get caught in his bike chain, and slowly peddled to Reed's house. When he arrived he met Reed's mother at the door; she greeted him with, "See, we have a lot of family back in Ohio, and we're going to be taking a lot of pictures tonight, and they're going to see them. And we don't know if it would be a good fit for us." Minhaj says that night was the best he'd ever been dressed while playing Mario Kart home alone.

The scene makes the point that immigrants often experience casual racism masked as American tradition, which can be isolating because the racism prevents them from participating in the mainstream. "One of the show's main messages is the idea of the perception of the other," explains Minhaj, who first got into comedy 11 years ago when, as a college student, he was inspired by Chris Rock's HBO stand-up special Never Scared. "It's the idea that, 'These people are coming into our country and changing the make-up and the way things used to be,' and I argue on the contrary through my own personal narrative."

Minhaj lived with his father in Northern California until he was 8 years old, while his mother finished medical school in India. In Homecoming King, he talks about visiting family members in India, and how growing up American changes first-generation American kids' relationships with their parents' native countries. "I feel like the rapper that made it," says Minhaj. "Like, this is what I go back to. And I'm just like, 'This is how you guys are living? What? Yo, when Hasan's here, everybody eats, son! Everybody eats. Capri Suns on me, fam. Gushers on me, fam. Fruit Roll-Ups on me.' They're losing their minds over stale Oreos. 'Oh my god, Hasan, its one cookie, but now it's two!' And I'm like, 'I'm not even gonna give you a Thin Mint. You will shit your pants.'"

That vignette, while very funny, speaks to the generational and spatial divides that impact the lives of first-generation Americans. To describe Homecoming King's many stories, Minhaj borrows a phrase from W.E.B. Dubois' "The Souls of White Folks," by saying his negotiation between Indian traditions and American ones represent a "double consciousness." "As a brown American," he says, "one thing I have always felt is that, on the one hand, there's this feeling that I love this country. At the same time, when you're watching TV and you see that our entire foreign policy over the last 30 years has been bombing brown countries, and they cut to footage of a kid dying and his name is Hasan, and you are sitting there and your name is Hasan, it's very powerful. Satirizing this is the only way to make sense of this dual narrative that so many people feel."

Homecoming King showcases a much-needed narrative that isn't often told by someone who has actually lived it. "When you're a minority in this country, what you're fighting for and striving for is just the filet mignon cuts of life," says Minhaj. "As kid I never even thought this career in entertainment was possible because I never saw people like me in movies. I'm just trying to add a little piece onto the narrative that's called 'the American story.'"

Homecoming King ended its run at the Cherry Lane Theater on November 15. The show picks back up January 7th through January 30th. For more information, click here.