For the remainder of 2015, we’ll be nudging Academy voters toward deserving films, performers, and craftsmen who risk getting lost in the Oscar shuffle. This week: three eye-opening performances in the best hip-hop biopic ever made. 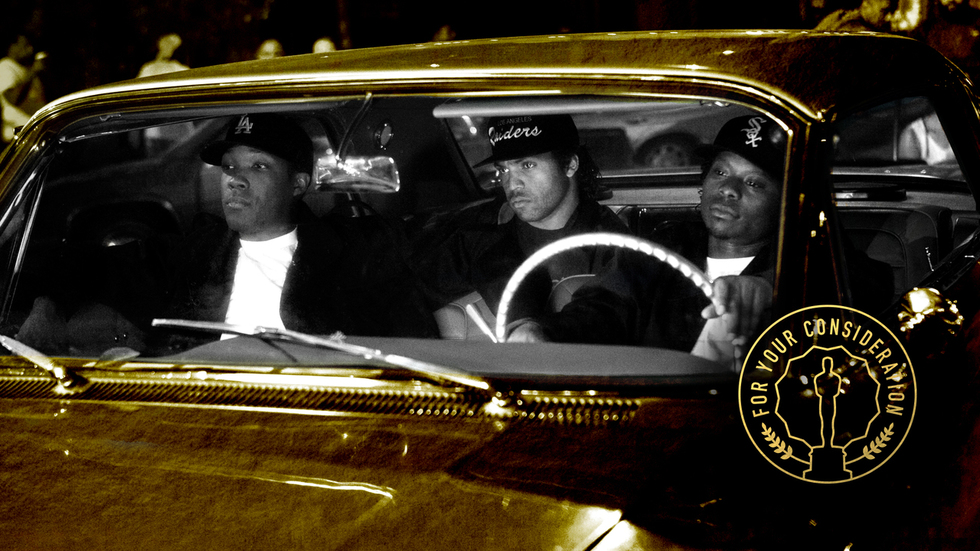 Under normal circumstances, a film like Straight Outta Compton wouldn't stand a chance during Oscar season.

While standardized biopics are yearly fodder for the predictably discerning Academy of Motion Picture Arts and Sciences, or, in short, the AMPAS, director F. Gary Gray isn’t the painfully generic sort of based-on-a-famous-person’s-life film that the Academy's voters generally support. It’s the polar opposite of Meryl Streep in the perfunctory yet nevertheless nominated Margaret Thatcher flick The Iron Lady. Straight Outta Compton is profane, aggressive, and blistering with defiant rap music, chronicling the meteoric rise and inevitable fall of the pioneering "gangsta rap" crew N.W.A, comprised of current entertainment industry heavyweights Dr. Dre and Ice Cube, the late Eazy-E, and the lesser-prominent MC Ren and DJ Yella. And if there’s anything Oscar tastemakers typically resist more than horror movies, it's the hip-hop culture.

Those external characteristics have launched Straight Outta Compton into the awards season conversation, whether the Oscar bloggers who can’t stop fawning over obviously-engineered-specifically-for-the-Academy's-interests films like The Danish Girl and Steve Jobs are willing to accept it or not. It's the Oscar race's most unlikely "dark horse," and it absolutely deserves to be recognized by the AMPAS in some capacity. If similar financial juggernauts like The Blind Side can win statues, the far superior Straight Outta Compton should definitely get a shot; moreover, if Ridley Scott's enjoyable yet lightweight box office smash The Martian is a contender, Gray's equally successful film has earned the right to treated just the same.

Straight Outta Compton's strongest category option: Best Actor, or, at the very least, Best Supporting Actor. It’s arguable whether the film's three leads—Corey Hawkins, as Dr. Dre; O'Shea Jackson, Jr., as his father, Ice Cube; and Jason Mitchell, as Eazy-E—are each front-men or mutually supportive of one another in a larger ensemble, but there's no disputing the fact that all three of Straight Outta Compton's previously unknown stars are exceptional in the film.

Playing the group's most post-N.W.A.-popular members, Hawkins and Jackson both carry their respective scenes with sheer can't-take-your-eyes-off-of-them magnetism. The easiest-going N.W.A. member, Dre functions as the group's levelheaded anchor, for which Hawkins' commanding presence works wonders; a stage-trained thespian before shooting Straight Outta Compton, his natural gravitas balances the bigger personalities exuded by Jackson's Cube and Mitchell's Eazy-E. In one key scene, Hawkins' subtly imposing disposition rescues what would otherwise be a laughable, hard-to-believe sight, that of Dr. Dre belittling the notoriously dangerous bully Suge Knight and a room full of Knight's partying, gun-toting goons.

Watching that scene, there's no questioning Dre's ability to put the gang-affiliated behemoth in his place, thanks to Hawkins’ impeccably in-control performance aura throughout everything that’s preceded the scene. His fictionalized Doctor has more than sufficiently earned the benefit of the doubt, even though the scenario isn't dissimilar to seeing Vin Diesel somehow not get pummeled into submission by Dwayne Johnson in Fast Five's toe-to-toe fight sequence.

For Jackson, his Straight Outta Compton breakthrough is powered by explosive come-and-get-me rebellion. Before he made movies like Are We There Yet? and 21 Jump Street, Ice Cube was one of rap's hardest lyricists, a verbal revolutionary whose music kept a figurative middle finger up in the air and aimed at police, the establishment, and, in the mid-'90s, at his former N.W.A. colleagues. He wrote pretty much all of the group’s verses outside of MC Ren's, and the fact that he received pennies compared to Eazy-E and company, due to an insultingly humble but wrongfully-signed-without-lawyer contract, led to heated outbursts against Eazy and N.W.A.'s opportunistic, elder white manager, Jerry Heller (played by Paul Giamatti).

Jackson turns his father’s youthful edge into electrifying and scene-stealing gusto. His cinematic version of Cube is thunderous with a necessarily sensitive underlining. He tears through Cube's recording of the N.W.A.-skewering diss track "No Vaseline" with an animalistic confidence; on the flipside, near the film’s end, as Eazy-E lies in a hospital bed, losing his fight against HIV, Jackson beautifully conveys the softness lying beneath Cube’s rugged exterior.

Many have criticized Straight Outta Compton’s problematic third act, which loses the film's earlier assuredness in favor of a rushed, episodic Behind the Music-like finale, and they're justified in doing so. But the film’s closing section is also where Mitchell’s portrayal of Eazy-E becomes next-level superb. Gray cleverly opens Straight Outta Compton with Eazy, during his gangbanger days, barely escaping a simultaneous drug deal gone bad and corpse-ridden cop raid—the sequence gives Eazy the film’s biggest character arc.

In the group's early days, the physically diminutive Eazy is N.W.A.'s shot-calling Napoleon Bonaparte, handling their business affairs and initiating a three-way power struggle with Dr. Dre and Cube; as Mitchell plays him, though, Eazy’s domineering methods suggest a well-meaning hustler who's unknowingly being manipulated by Heller and fame. When he succumbs to HIV in Straight Outta Compton's backend, Eazy's stripped of his previous man-in-charge cache, and left with nothing, and in those moments, Mitchell's harrowingly damaged aura lends Eazy a profoundly tragic quality.

If none of these performances registers with AMPAS voters over the next month, Straight Outta Compton will be associated with another tragedy –actually, make that three tragedies. On the combined strength of its centralized performers, Straight Outta Compton is the year's best biopic, not to mentions most satisfying movies overall. However, instinct would lead Oscar-savvy pundits to assume that the biopics Steve Jobs, The Danish Girl, and Black Mass will strike bigger chords with the nominations committee—after all, the Michael-Fassbender-led Steve Jobs was written by Oscar regular Aaron Sorkin, The Danish Girl stars past Best Actor winner Eddie Redmayne as a transgender trailblazer, and Black Mass has made Johnny Depp respectable again. It'd take a daring crew of ballot-casting rebels to opt for Hawkins, Jackson, and Mitchell over flashier names like Fassbender, Redmayne, and Depp. But it'd take an out-of-touch rube to say that Straight Outta Compton’s actors didn't give performances equal to, if not better than, Fassbender, Redmayne, and Depp.

And don't even get me started on the almost-guaranteed chances of The Martian's Matt Damon scoring a nod instead of Hawkins, Jackson, and/or Mitchell. To be petty, I'll point out that Straight Outta Compton is just as worthy of the Academy's The Blind Side/The Help slot—read: the "Let's acknowledge at least one movie that made over $150 million and make Joe and Jane Popcorn Eater want to watch our telecast" nominee—as The Martian, having grossed $161 million stateside, putting it slightly behind Ridley Scott’s sci-fi film's $214 million intake. But Hawkins', Jackson's, and Mitchell's performances speak louder than dollar signs. In The Martian, Matt Damon basically plays a spacebound extension of Matt Damon, but with a flair botany. It's not a performance so much as it's a self-distillation, whereas Straight Outta Compton's primary trio embody three of the hip-hop culture's crucial game-changers with a boundless humanity that essentially reframes history.

In effect, they've given "gangsta rap" a good name. Let's hope the traditionally hip-hop-deficient Academy is ready to celebrate that.