Home » Tribeca News » Don't Bother Voting on the Oscars If You Haven't Seen... The Safdie Brothers' HEAVEN KNOWS WHAT
View All News

Don't Bother Voting on the Oscars If You Haven't Seen... The Safdie Brothers' HEAVEN KNOWS WHAT

For the remainder of 2015, we’ll be nudging Academy voters toward deserving films, performers, and craftsmen who risk getting lost in the Oscar shuffle. This week: a harrowing and mesmerizing descent into NYC's heroin-fueled underbelly. 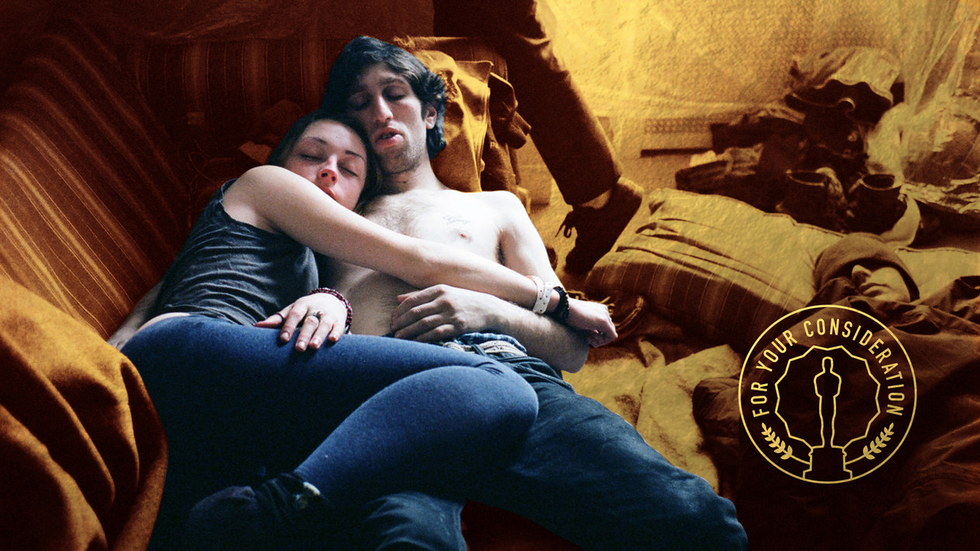 There hasn't been a sadder line of movie dialogue in 2015 than this, taken from brotherly filmmakers Josh and Benny Safdie's remarkable Heaven Knows What: "Would you forgive me if I died?"

The speaker is Harley, the fictional, homeless heroin addict played by the former real-life heroin addict, and first-time actor, Arielle Holmes. She's pleading with her dirt-covered, cold-hearted monster of a lover, Ilya (Caleb Landry Jones), over an unknown transgression. Whatever her mistake is, or was, it's meaningless. What matters is the romantic hopelessness in Harley's eyes as she begs Ilya for forgiveness, and the unflinching immediacy with which the Safdie brothers shoot Harley’s gaping wrist after she slashes it clean open in broad daylight, on a crowded street, as the hideous Ilya emphatically laughs and yells, "You see that shit!" as if he's watching MTV's Ridiculousness.

And that's just what transpires in the film's opening minutes. The razor slash sets up the proceeding 80-minute guillotine to the head. Heaven Knows What’s altogether thunderously visceral nature is what will keep it off of Oscar voters' radars and relegate its statue chances to the Gotham Awards, for which it's received two nominations (Best Picture, and Best Breakthrough Actor for Arielle Holmes), and the Independent Spirit Awards. The Academy doesn't respond well to confrontational material of this kind, which is one of the many reasons why the Academy Awards are largely a joke. If AMPAS voters were to give Heaven Knows What a look, though, they’d be knocked sideways, and unless they're drinking the big-studio-brewed Kool-Aid, or they're on producers' payrolls, or they're simply dense, there’s no way they'd be able to say it's not better than current Best Picture frontrunners The Martian, Bridge of Spies, Steve Jobs, and Brooklyn.

It's all the more impressive when you consider that Heaven Knows What’s NYC-born-and-raised filmmakers are so damn young: Josh is 31; Benny, 29. This is their third feature as co-directors, following 2009’s Daddy Longlegs and the 2013 biographical sports documentary Lenny Cooke. It’s by far the best thing they've made to date, and positions them as two of the most exciting young directors not only in NYC, but also the entire film industry. There's a reason why Variety felt comfortable enough to have them sit down with the prestigious and much older filmmaking siblings Luc and Jean-Pierre Dardenne (The Kid With a Bike, 2011; Two Days, One Night, 2014) for a two-on-two chat. They justify such company.

Heaven Knows What is an oppressively bleak yet captivating examination of a subculture most New Yorkers actively overlook: those unkempt young vagrants who ask for money on sidewalks and make pedestrians suddenly begin pantomime-typing on their phones as they hurriedly walk by the less-fortunate people lying on cardboard boxes. Marauding throughout the Upper West Side, Harley gets high in Central Park, steals 5-Hour Energy drinks from corner stores and sells them to bodega owners to fund her drug habits, wakes up from skag hangovers in foreign, ramshackle beds, and begs subway patrons for free MetroCard swipes. It all feels lived-in, not acted out.

The film is based on Holmes yet-to-be-published memoir, Mad Love in New York City, first commissioned by Josh Safdie when he randomly met Holmes in Manhattan’s Diamond District two years ago. He was struck by her beauty and thought she'd be great for the brothers' next movie, a Diamond District story they'd been heavily researching. Holmes and Safdie exchanged numbers and met for dinner two weeks later, but she looked different, more disheveled. At last year’s New York Film Festival, Josh recounted how, at that dinner, Arielle told him about the man she loved, named Ilya, and spoke about him as if he Josh knew him, or should know him, like one of the Jonestown cult members would've discussed Jim Jones. After Arielle revealed that she was homeless, Josh got her a job on a friend’s music video, but she flaked. A week removed from being a no-show, Arielle called Josh out of the blue and told him that she’d just gotten out of the hospital following a suicide attempt, one which Ilya provoked.

That's the incident seen as Heaven Knows What opens, and it's indicative to how brutally real the film is for Holmes. When Josh asked her to write about her life, Holmes encapsulated six years of her life into 160 pages, which Josh and co-writer Ronald Bronstein condensed down to a 100-page script that covers a two-week span in Harley's punishing, seemingly hopeless existence. The names may have changed, but Holmes' truthfulness is the film's driving force.

The Safdie brothers' audacious direction and confident handling of the dicey material are Heaven Knows What's secret weapons. To convey Holmes’ internalized desperation, director of photography Sean Williams frames her tightly in close-ups; those tighter frame-ins are juxtaposed with numerous wide-angled, scenery-exposing shots, capturing Harley's busy metropolitan world while driving home the fact that she's just another figure in NYC’s nonstop rat race. The Safdies purposefully avoided using handheld camerawork to shun a documentary-like feel; Heaven Knows What is highly stylized, often feeling like a strung-out junkie's dusty-looking fever dream. But it's the film's inescapable naturalism that tips it over into a waking nightmare, with multiple sequences playing out in real time with authentic conversations that feel more like improv than scripted dialogue And to bring you dead-smack into Holmes' permeating sense of narcotic-induced disorientation, they charge key scenes up with an assaultive, classical-music-on-acid synth score.

Those filmmaking elements unforgettably converge right out the gate. Within the film as a whole, Heaven Knows What's ferocious opening credits sequence sets the stage for the visceral remaining 85 minutes to come; taken on its own terms, the sequence is among this year's best chunks of isolated filmmaking. It's as intense as anything in Denis Villeneuve's Sicario and as propulsive as the craziest Mad Max: Fury Road sequence, and hardly anything really happens. The single-take, four-and-a-half-minute-long shot comes directly after Harley’s suicide attempt. She’s racing around a hospital looking for help; her desperation is punctuated by warbling, spacey synthesizers. The soundtrack drowns out Harley's pleas, leaving her powerless. The music engulfs you. Though there isn't the same kind of physical violence, Heaven Knows What’s opening credits stretch rivals Steve McQueen's brutal guards-beat-up-the-inmates scene in 2008's Hunger in its secondhand queasiness.

During last year's NYFF post-screening Q&A, Josh Safdie explained the sequence’s sonic choices by reasoning that, "When someone's in that world [of drug addiction], they're screaming so loud, but nobody hears them." In 2015's crowded movie field, flooded with countless VOD releases and a surplus of indie art-house offerings, Heaven Knows What has suffered a muting similar to Harley’s in that hospital wing. The film roars with such assured, high-caliber artistry yet it’s been widely overlooked since its limited theatrical release in May, save for those surprising but deserved Gotham Awards nods. As critics and cinephiles begin finalizing their best-of-the-year lists, though, here’s to hoping they give Heaven Knows What a fair shake. It isn't a pleasant watch, but it's unquestionably essential.

One thing's for sure: The movie gods wouldn't forgive those who'd let it die off into cinematic obscurity.

Heaven Knows What is available on DVD and Blu-ray. Buy it here. It's also available for purchase or rental on iTunes.