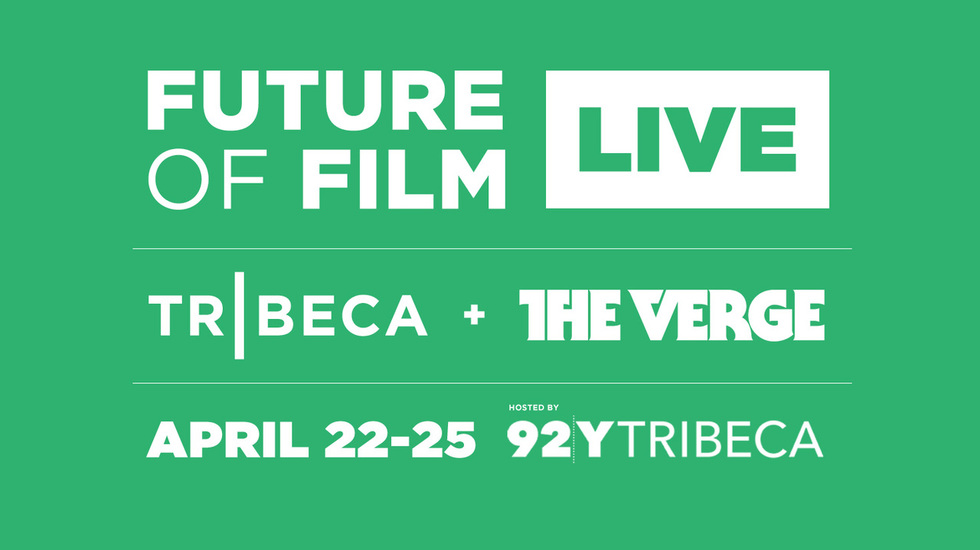 The 2013 Tribeca Film Festival (TFF), presented by founding partner American Express®, is thrilled to announce the lineup for the “Future of Film Live” conversation series, sponsored by Sony and GE FOCUS FORWARD, that will take place during the course of the 12th annual Festival. Running from April 22-25 at 92YTribeca, this free program will feature seven talks with filmmakers and industry leaders on the ever-evolving nature of the movie-making industry.

Now in its 2nd year, the “Future of Film Live” series is dedicated to fostering meaningful dialogue concerning all aspects of the film industry from the creation to the distribution of the final product. No subject is off-limits, and these conversations will cover such topics as digital filmmaking, non-linear storytelling, crowdfunding, online distribution, and theatrical innovations.

Moderated by Joshua Topolsky, Editor-in-Chief of The Verge, industry players like A.O.Scott, David Denby, Nate Mitchell, Dan Connors, Christina Voros and Todd Wagner will discuss and debate the topics at the forefront of their industries. In addition, Chris Hardwick of Nerdist will moderate a day of conversations with David Gordon Green, Lisa Donovan, The Safdie Brothers and Morgan Spurlock. All topics will be candidly discussed and debated in front of a live audience. For those of you who can’t make it in person, video highlights will be released daily.

While these talks are free and open to the public, all interested parties must register to gain entry. We are excited to announce that, for the first time, a limited number of Future of Film passes will be available for sale at tribecafilm.com. If you are the holder of one of these coveted passes, you'll get reserved seating to the Future of Film Live series, the Disruptive Innovation Awards, and TFI Interactive Day as well as tickets to Tribeca Talks® After the Movie panels after screenings of Tricked, directed by Paul Verhoeven, and the revolutionary video game, Beyond: Two Souls. How great a deal is that?

A complete schedule and list of participants follows. (Note: All events in this series begin at 12 p.m. and one reservation covers both of the day's events. Doors open at 11:30 am. Registered guests will be given seating priority up to 11:45 am, when the Rush Line will open for walk-in guests.):

Josh Topolsky (EIC of The Verge) moderates a conversation/debate on the ever changing world of film distribution with key names from some of the industry’s most important players. Panelists include Richard Wellerstein of AT&T U-Verse, Mike Imbesi of Comcast, Avner Ronen of Boxee and Kristin Jones from Vuguru.

Is Non-linear Storytelling the Future of Film?

Tuesday, April 23: A Conversation with Nerdist

Chris Hardwick will interview filmmakers and new media rock stars and discuss topics including the rise in digital filmmaking and online distribution. Panelists include The Safdie Brothers, Andy Goldberg, Global Creative Director, GE and filmmaker Morgan Spurlock. Chris will also have a one-on-one conversation with director/producer David Gordon Green to discuss past work, upcoming projects and his views on the future.

The Death of Film? Answers and Arguments

Josh Topolsky (EIC of The Verge) interviews two titans of the film industry – A.O. Scott and David Denby – on their thoughts about the future of film.

A conversation with Todd Wagner on the Future of Film

Josh Topolsky (EIC of The Verge) has a one-on-one conversation with Todd Wagner, co-owner of 2929 Entertainment, owners of Magnolia Pictures, Landmark Theaters, and HDNet films on the future of the film business.

(Note: All events in this series begin at 12 p.m. and one reservation covers both of the day's events. Doors open at 11:30 am. Registered guests will be given seating priority up to 11:45 am, when the Rush Line will open for walk-in guests.)