Roland Emmerich's upcoming Stonewall movie is already being accused of glossing over LGBTQ history in the same week that a new study confirms Hollywood's egregious lapses in diversity. Plus: discover the trans-focused short film that's quickly gaining traction amid the controversy. 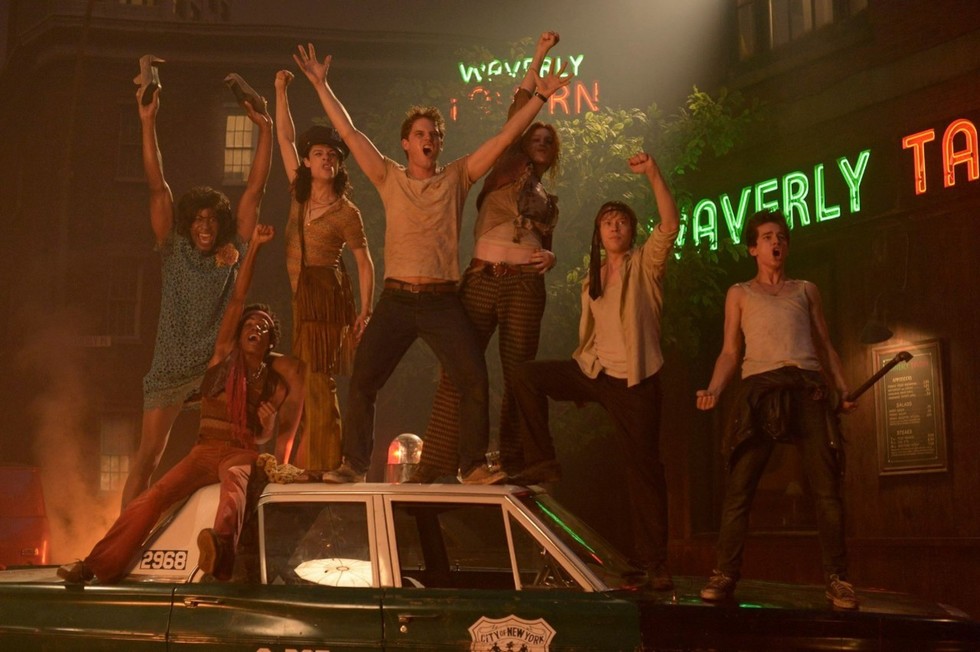 The trailer for this fall's historical gay rights drama Stonewall, directed by Roland Emmerich, premiered Tuesday, and while I can at least admit that I was moved by the Obama opening and that Old Montreal convincingly passes as sixties-era New York, my initial impression is the same as everyone else's: yikes.

There's a hell of a lot of cisgender white men in this clip for a revolution that was famously, valiantly fought by people who cross gender, racial, and orientational lines. Marsha P. Johnson, Miss Majors, Sylvia Rivera, et al. are all seemingly M.I.A. in a movie, penned by acclaimed TV scribe and Pulitzer-finalist playwright Jon Robin Baitz, that once again re-writes a pivotal moment in multiethnic, non-heteronormative LGBTQ history to center around the personal conflicts of a hot, strapping, young white man, played here by War Horse's British up-and-comer Jeremy Irvine, who evidently — and this takes some serious gall on the parts of all involved, if true — throws the rebellion's first brick.

In less than two days, a petition on Gay-Straight Alliance Network calling for a boycott of Stonewall has gathered over 8,000 enraged signees. The trailer's debut and the subsequent uproar over the film's apparent white-washing have also coincided with "Inequality in 700 Popular Films," a new study from the Media, Diversity, and Social Change Initiative at the University of Southern California. The study, which examined portrayals of gender and race in 100 top-grossing films of the past eight years, basically re-affirms the infuriating if unsurprising reality that an industry dominated by white men only really cares about white men. I suppose this is news to anyone who thought Hollywood was becoming more diverse, but one need look no further than the eye-opening tumblr project Every Single Word, Beyond the Lights director Gina Prince-Bythewood's recent criticism of Netflix's lazy racial bias, Marvel's inability to make it work with Ava DuVernay, that ridiculous Aloha debacle, or the fact that yet another Spider-Man movie is being made with — shocker! — a straight white boy at its center to see that things are pretty much staying the same.

Based on its trailer, Stonewall only looks to be widening the diversity gap in Hollywood and the indignation this dubious trailer has ignited is hard not to side with. It's especially disheartening in this of all years, for reasons that should be more than clear, to see such a specious cover-up of an extensive rainbow of trailblazers whom so many of us remain proudly indebted to. And yet...

Even if Stonewall might be as offensive as its preview sure makes it appear, I'm willing to give the film a very measured benefit of the doubt until, you know, someone has actually seen the full thing. This current trend of prematurely reviewing and burying movies based on two-minute trailers and scattered word-of-mouth is an occasionally misguided pattern that is dooming plenty of great or at least culturally indispensable films — not that Stonewall will necessarily rank among them — to misunderstanding and needs to stop.

Emmerich also happens to be openly gay, though that's obviously not assurance in itself, and has made ongoing promises that the film provides an inclusive and well-represented portrait of how it was, even if reading the quote "We have drag queens [and] lesbians…" in a recent Vulture interview produces an iffy image of some poor P.A. taking a tally of some butch and bewigged extras at the door of the inn. And sure, Baitz has totally gypped the film's central, lopsided love triangle between a hunky out-of-towner, a white community leader, and an abused Latino transwoman from Nigel Finch's barely-remembered 1995 dramatization, also entitled Stonewall.

But still, I'm trying to keep an open mind, or, even better, follow Ava DuVernay's lead in this matter. DuVernay, to no one's surprise, conducted one of the most refreshing and thought-provoking conversations on Twitter yesterday in response to the Stonewall backlash, the highlights of which are produced below:

Was feeling some kinda way re: #stonewall. Then thought of the folks mad that LBJ isn't the main character of #selma. And unfolded my arms.
— Ava DuVernay (@AVAETC) August 6, 2015

My point: if we are depending on this power structure to center, include, advocate for those outside of "their center," we gonna stay mad.
— Ava DuVernay (@AVAETC) August 6, 2015

We can't stay mad. Can't have our attention diverted. Cause then we always start from zero. There are plans to make. I unfolded my arms.
— Ava DuVernay (@AVAETC) August 6, 2015

Even if Stonewall's erasure is as pernicious as plenty of us are suspecting, devoting the energy of our inevitable anger to an industry that has exhibited only the smallest interest in changing its worrisome ways is a futile method of actually getting these broader, tougher-minded historical stories made and seen. Because Hollywood will never lead the liberation charge. Instead, let's devote our time to directors like DuVernay or writers, directors, and producers like Reina Gossett and Sasha Wortzel. Gossett and Wortzel are currently raising funds on Women Make Movies for their short film Happy Birthday, Marsha!, which tells the vital story of the aforementioned Marsha P. Johnson, an African-American drag performer and legendary trans activist who became one of the defining figures of the queer liberation movement, even though she's likely little more than a backgrounded presence in Stonewall. The film even stars actual trans women of color (pictured below), including Tangerine's über-charismatic leading lady Mya Taylor as Johnson. (Donate to the project here!)

It's immensely inspiring to see up-and-coming filmmakers like Gossett and Wortzel, as well as active pros like DuVernay, who still choose to fearlessly dissect ignored or misunderstood heroic figures and harrowing, heart-rending periods of history in the dynamic and diversified ways that historical cinema was always meant to.