The build-up for TFF's 15th year is officially underway. 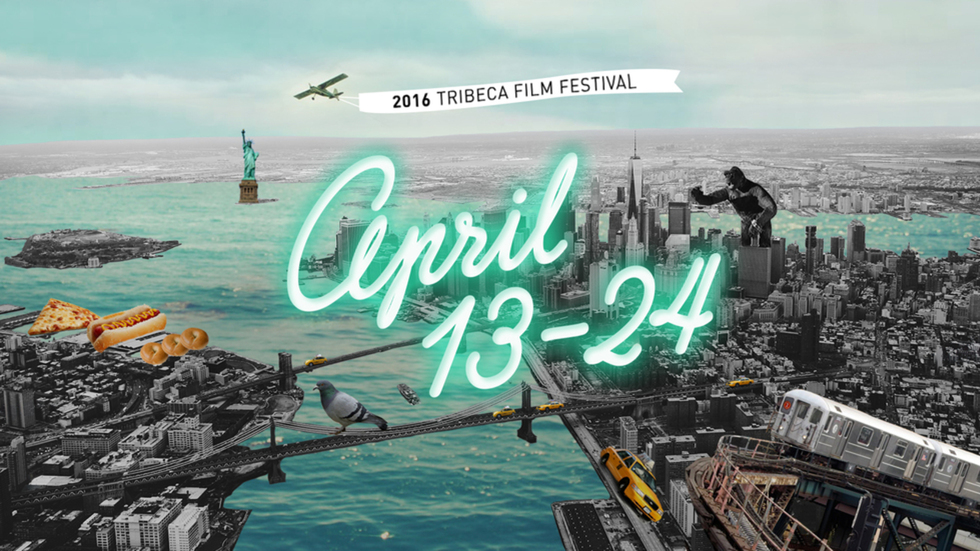 It seems like yesterday that we were celebrating the end of the 2015 Tribeca Film Festival with co-founder Robert De Niro and his fellow Goodfellas cast members, for the movie’s 25th anniversary. Time flies when you're, well, living. Today brings news that will make Father Time's speed seem even faster: the next edition of the Tribeca Film Festival already has a series of official dates.

The festival, once again presented by AT&T, will return for its 15th year on April 13-April 24, 2016, along with its key programs and attractions. For the second year, TFF’s creative hub will be Spring Studios, where attendees, industry and press congregate for innovation events, parties, Tribeca Talks® panels and the fourth annual Storyscapes program, TFF’s juried showcase of interactive storytelling, and the TFI Interactive lineup.

This year’s TFF broke records in regards to gender diversity behind the camera, with 33% of the 2015 feature film program’s directors being women. That momentum will carry over into 2016, as TFF reteams with Coach to present The Nora Ephron Prize for the third straight year, awarding $25,000 to one special female filmmaker.

The Tribeca Film Festival® will be presented by AT&T and will also have its own headquarters: the Tribeca Festival Hub, a.k.a. the new name for the same Spring Studios location where several of TFF 2015's coolest panels and live events took place. Festival Hub Passes are on sale now to the general public and provide an all-access experience to TFF's creative center, including talks, special screenings, interactive installations, live music, open bars, and an invitation to a Tribeca Film Festival Filmmaker party. Act now to take advantage of the special early discount price of $399.00 (regular price: $550.00) through December 31st. Buy your Hub pass here.

For TFF's 2016 edition, the festival's team will jam-pack the Hub with an array of filmmakers, tech innovators, and other high-profile attendees, many of which will be a part of the first installment of TFF's new Tribeca Talks: Storytellers platform, a series of in-depth conversations with leading creators in their respective fields. TFF has already announced the first two confirmed Storytellers, and they're a couple of serious Hollywood heavy-hitters. First up is Tom Hanks, who'll follow up Steven Spielberg's Bridge of Spies with two high-caliber movies in 2016: Ron Howard's latest Robert Langdon adventure, Inferno, and director Clint Eastwood's Sully Sullenberger biopic, Sully. TFF will also welcome in Tina Fey, whose 2016 itinerary includes starring in Crazy, Stupid, Love. co-directors Glenn Ficarra and John Requa's new comedy, Whisky Tango Foxtrot, and overseeing the second season of the Netflix original series Unbreakable Kimmy Schmidt.

Over at the Hub, 10 of TFF 2016's 12 days will be dedicated to immersive storytelling experiences, musical performances, panel discussions, and special guests, including the world premiere of Invasion!, the first interactive and animated virtual reality film from Baobab Studios, co-founded by Eric Darnell (co-director of Antz and Madagascar) and Maureen Fan (former VP of Games for Zynga). Invasion! promises sci-fi zaniness akin to Tim Burton's Mars Attacks!, following two fluffy white bunnies as they defend Earth against a legion of alien intruders hell-bent on taking over the planet by any means necessary.

On April 19, it'll be home to Imagination Day, powered by the Hatchery. The industry's top minds will convene for an all-day summit focused on, "What happens when our wildest dreams become reality, and what will that reality be in our not-so-distant future?" The first round of confirmed speakers is no joke: entrepreneur Sir Richard Branson, founder and chairman of the Virgin Group, and business leader and product innovator Regina Dugan, of Google ATAP. The Hub will also host the following esteemed VR creatives and tech entrepreneurs: Second Life and High Fidelity founder Philip Rosedale, VR directors Félix Lajeunesse and Paul Raphaël of Felix & Paul Studios, and STRIVR founder and CEO Derek Belch.

Not unlike this year's fest, TFF 2016 will also turn the Festival Hub into a one-stop shop for all things technologically advanced, and it'll all be guided by Felix & Paul Studios, the Hub's "Featured Creator." Lajeunesse and Raphaël will bring Felix & Paul Studios' unique and progressive brand of live-action VR and software to the Hub, along with some of their latest work.

Felix & Paul Studios' innovations will pair well with the fourth edition of TFF's Storyscapes program, once again committed to next-level films and interactive storytelling exhibits. The Hub will also feature the fifth annual TFI Interactive, a day-long forum where media, gaming, and tech will converge—and, most importantly, where fun will be had. TFI's "interactive playground" will give Hub visitors the chance to experience VR firsthand and play a variety of video games.


"When we started the festival 15 years ago, we did so with the belief that film and culture had the power to unite a community," says TFF co-founder Jane Rosenthal. "That has continued to drive our mission, but as Tribeca has grown, so has our definition of storytelling. We are looking forward to hosting some of the most exciting creative minds in the world at our Hub this year and helping bring their experiences and views to life for our audiences."

So grab your 2016 calendar now and start clearing out space during the entirety of April 13-24. We've got that whole 12-day span covered. See the breakdown below for a small portion of the fest's events, with an emphasis on the Hub. Keep in mind, this is only the beginning—additional programs will be announced in the coming months here at TribecaFilm.com. All events and lounges at the Hub are accessible with a Festival Hub Pass unless otherwise noted.

New this year, Tribeca Talks: Storytellers provides a platform for creators from diverse backgrounds, including actors, musicians, artists, and writers, at the forefront of their professions, to discuss and explore their careers and crafts in conversation.

• Tina Fey
Tina Fey is an award-winning television and film actress. She was the executive producer, head writer, and star of 30 Rock. Ms. Fey also completed nine seasons as a writer and cast member on Saturday Night Live. Ms. Fey's film projects include Mean Girls, Date Night, This is Where I Leave You, Sisters, and the upcoming Whiskey Tango Foxtrot. In April 2011 she released her first book, Bossypants. She is currently the co-creator and executive producer of Unbreakable Kimmy Schmidt.

• Tom Hanks
Tom Hanks is an award-winning actor, producer and director. One of only two actors in history to win back-to-back Best Actor Academy Awards®, he won his first Oscar® for Philadelphia and his second for Forrest Gump. Hanks has also been nominated for Academy Awards® for five other roles and has also won Golden Globes for Big and Cast Away. Hanks was most recently seen in Stephen Spielberg's Bridge of Spies.

On Tuesday, April 19, the Tribeca Film Festival will host some of the most influential, provocative and creative minds for an all-day summit that asks: what happens when our wildest dreams become reality and what will that reality will be in our not-so-distant future? We are at an inflection point in history. Experience the wonder and inspiration of new technologies, as tech's thought leaders reveal what is just beyond the horizon through multisensory storytelling.

• Derek Belch
Derek Belch (Co-Founder, CEO, STRIVR Labs, Inc.) laid the foundation for STRIVR during the 2014 season with the Stanford Cardinal football team. Belch was an assistant coach for the team while completing a master's degree with an emphasis in virtual reality. His thesis project was exploring virtual reality applied to sports training and he worked with the Cardinal during the season to build and test the technology that is now STRIVR. Belch was a former kicker for the Cardinal from 2003-2007, and is one of only two Stanford kickers in history to hit two 50-yard+ field goals in a single game. He kicked the winning extra point in Stanford's historic upset of USC as 42-point underdogs. While playing at Stanford, Belch obtained a BA in Communication and MA in Journalism. Prior to returning to Stanford to coach, Belch earned his MBA from USC's Marshall School of Business.

• Sir Richard Branson
Sir Richard Branson is Founder and Chairman of the Virgin Group which has expanded into many diverse sectors from air and ground travel to telecommunications, health, space travel and renewable energy through more than 200 companies worldwide. In 2004, Richard established Virgin Unite, his non-profit foundation. It mobilizes the talent and resources from across the Virgin Group and beyond, to tackle tough social and environmental problems in an entrepreneurial way. Richard has been working closely with Virgin Unite to bring together the right partners to help create new global leadership models to address conflict, climate change and disease. In 2009, Richard brought together a group of the world's top entrepreneurs to initiate the Carbon War Room. The vision is to mobilize capital, innovation, expertise and international collaboration to increase the effectiveness of climate change efforts already underway and to focus on filling any gaps.

• Regina Dugan
Dr. Regina Dugan, Vice President of Engineering at Google, leads the Advanced Technology and Projects (ATAP) group, a skunkworks operation focused on next-generation mobile. From May 2012 until February 2014, Regina was SVP and a member of the Senior Leadership Team at Google-owned Motorola Mobility. Prior to joining Google, Regina served as the Director of the Defense Advanced Research Projects Agency (DARPA), the principle agency within the Department of Defense for research, development and demonstration of high-risk, high-payoff capabilities; she was the first woman to lead the Agency. Regina has a PhD in Mechanical Engineering from Caltech and has been widely recognized for her leadership in breakthrough innovation and technology development.

• Félix Lajeunesse and Paul Raphaël
Félix Lajeunesse and Paul Raphaël are at the forefront of cinematic virtual reality. After 10 years of collaborative work as directors of immersive cinematic experiences, they co-founded Felix & Paul Studios to solely focus on storytelling through cinematic virtual reality. Through the symbiosis of artistic and technological innovation, they create emotive, visceral and intimate experiences that provide audiences with an unprecedented sense of presence and emotional resonance. The studio's virtual reality creations include Jurassic World: Apatosaurus, the original series Nomads, and the recently premiered Inside Impact: East Africa with President Bill Clinton, and LeBron James Striving for Greatness.

• Philip Rosedale
Philip Rosedale created an innovative Internet video conferencing product ("FreeVue"), which was later acquired by RealNetworks, where in 1996 he went on to become Vice President and CTO. In 1999, Rosedale left RealNetworks, founded Linden Lab and built a virtual civilization called Second Life, creating an open-ended, Internet-connected virtual world. Following Second Life, Rosedale worked on several projects related to distributed work and computing. Excited by innovations in these areas and the proliferation of new VR-enabling devices, he re-entered the world of VR in 2013, founding High Fidelity. Philip holds a B.S. in physics from University of California, San Diego.

VIRTUAL REALITY EXPERIENCES - Throughout TFF
(Additional projects to be announced)

• Tribeca Festival Hub Featured Creator: Felix & Paul Studios - April 13-24
Felix & Paul Studios, led by Félix Lajeunesse and Paul Raphaël, will be the Tribeca Festival Hub's "Featured Creator." The VR filmmakers will exhibit a selection of their work, including Inside Impact: East Africa with President Bill Clinton, Cirque du Soleil's Inside the Box of Kurios, and Nomads: Maasai, throughout the space.

A juried section at the Festival showcasing groundbreaking exhibits in technology and interactive storytelling. 2016 projects to be announced.

The fifth annual TFI Interactive will once again assemble the brightest thinkers from the worlds of media, gaming and technology for an all-day forum and "interactive playground" that explores a selection of the speakers' projects.