Between the presidential election and Black Lives Matter, social awareness is sky-high in pop culture, particularly with young people. This year's Tribeca Film Festival has a multitude of films that speak to those concerns and beyond. 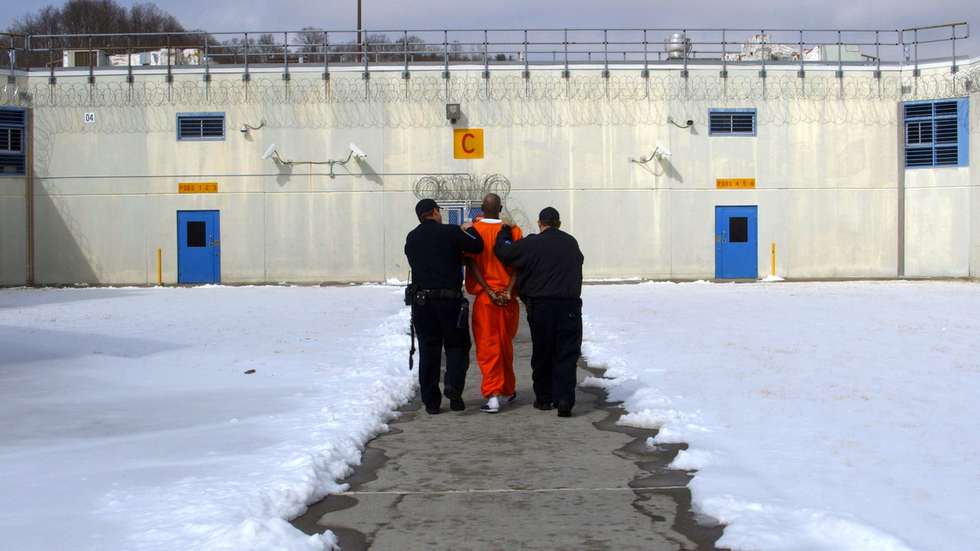 Social action has always been in Tribeca's DNA. After all, the Tribeca Film Festival was first launched in 2001 as a response to the 9/11 terrorist attacks on New York City, in an effort to uplift NYC's residents through cinema.

It's only right, then, that, in the years since, Tribeca has earned a sterling reputation for premiering some of the best and most profound new socially conscious documentaries, as well as provocative narrative films that have more to say than just, "Be entertained." Case in point: Body Team 12, the powerful documentary short about body collectors working through Liberia's Ebola outbreak; the film, produced by Olivia Wilde, premiered at 2015's Festival en route to a nomination at this year's Academy Awards. Also, the Oscar-nominated doc Cartel Land, which screened at Tribeca last year and was also just up for an Academy honor.

So which films at the Tribeca Film Festival have similar you-must-learn perspectives? Plenty, it turns out. The hot-button topics addressed within the Tribeca 2016 lineup include women's pro-choice rights (Abortion: Stories Women Tell), the prison system (Solitary, The Return), nuclear warfare (Command and Control and the bomb), and financial crime (Betting on Zero).

For all of those films and more, consult the following breakdown of Tribeca 2016's issue-driven film options. For screening dates, visit the Film Guide. Tickets go on sale March 29.

Command and Control
Section: Spotlight
Directed by Robert Kenner, written by Robert Kenner and Eric Schlosser. (USA) – World Premiere, Documentary.
A high-stakes documentary thriller, Command and Control—based on Eric Schlosser's 2013 book of the same name—explores the "human error" that led to an explosion at the Titan II nuclear site just outside Little Rock, Arkansas, towards the end of the Cold War, and probes how mutually assured destruction might actually mean self-annihilation.
BUY TICKETS HERE.

Midsummer in Newtown
Section: Spotlight
Directed by Lloyd Kramer. (USA) – World Premiere, Documentary.
Midsummer in Newtown is a testament to the transformative force of artistic expression to pierce through the shadow cast down by trauma. From auditions to opening night, we witness the children of Sandy Hook Elementary find their voice, build their self-confidence, and ultimately shine in a rock-pop version of A Midsummer's Night Dream.
BUY TICKETS HERE.

Southwest of Salem: The Story of the San Antonio Four
Section: Viewpoints
Directed by Deborah S. Esquenazi. (USA) – World Premiere, Documentary.
In 1994, four women were tried and convicted of a heinous assault on two young girls in a court case that was infused with homophobic prejudice and the Satanic Panic sweeping the nation at that time. Southwest of Salem is a fascinating true crime story that puts the trial of the San Antonio Four in context of their ongoing search for exoneration.
BUY TICKETS HERE.

Houston, We Have a Problem!
Section: Viewpoints
Directed by Žiga Virc, written by Žiga Virc and Boštjan Virc. (Slovenia, Croatia, Germany, Czech Republic, Qatar) – World Premiere.
The space race and NASA's moon landing are as much part of our national identity as they are fodder for conspiracy theories. Houston, We Have a Problem! adds new material to the discussion on both fronts, as filmmaker Žiga Virc investigates the myth of a secret multi-billion-dollar deal involving America's purchase of Yugoslavia's space program in the early 1960s. In Croatian, English, Serbian, Slovene with subtitles.
BUY TICKETS HERE.

Abortion: Stories Women Tell
Section: Viewpoints
Directed by Tracy Droz Tragos. (USA) – World Premiere, Documentary.
In 1973, the US Supreme court decision Roe v. Wade gave every woman the right to have an abortion. In 2016, abortion remains one of the most divisive issues in America, especially in Missouri. Award-winning director and Missouri native Tracy Droz Tragos sheds new light on the contentious issue by focusing on the women and their stories, rather than the debate. An HBO Documentary Film.
BUY TICKETS HERE.

Equity
Section: Tribeca Talks: After the Movies
Directed by Meera Menon
High-powered Wall Street banker Naomi Bishop (Anna Gunn) has been passed over for a promotion again. If she can successfully launch her next high profile IPO, she'll be back on top. To get the job done, she must bypass her ambitious assistant (Sarah Megan Thomas) and an aggressive US prosecutor (Alysia Reiner) watching her every move, in TFF Nora Ephron Prize winner and alumnus Meera Menon’s financial thriller. A Sony Pictures Classic release.
After the movie: Director Meera Menon, and other female directors discuss their experience in the industry.
Date: Tuesday, April 19
Time: 6:00 p.m.
Location: SVA 2
BUY TICKETS HERE.

Do Not Resist
Section: World Documentary Competition
Directed by Craig Atkinson. (USA) – World Premiere.
In Do Not Resist, director Craig Atkinson, through keen and thoughtful observances, presents a startling and powerful exploration into the rapid militarization of police forces in the United States. Filmed over two years, in 11 states, Do Not Resist reveals a rare and surprising look into the increasingly disturbing realities of American police culture.
BUY TICKETS HERE.

Untouchable
Section: World Documentary Competition
Directed by David Feige. (USA) – World Premiere.
When a powerful Florida lobbyist discovered his daughter was sexually abused, he launched a crusade to pass some of the strictest sex offender laws in the country. Today, 800,000 people are listed in the sex offender registry, yet the cycles of abuse continue. David Feige's enlightening documentary argues for a new understanding of how we think about and legislate sexual abuse.
BUY TICKETS HERE.

Solitary
Section: Viewpoints
Directed by Kristi Jacobson. (USA) – World Premiere, Documentary.
With unprecedented access, director Kristi Jacobson offers a deeply moving portrait of life inside solitary confinement within a supermax prison. Filmed over the course of one year, this riveting film tells the story of the complex personalities that dwell on either side of a cell door while raising provocative questions about the nature of crime and punishment in America today. An HBO Documentary Film.
BUY TICKETS HERE.

6x9: An Immersive Experience in Solitary Confinement
Section: Installations
Project Creators: The Guardian's Francesca Panetta and Lindsay Poulton
Key Collaborator: The Mill
Right now, 80,000-100,000 people are in solitary confinement in the US. They spend 22-24 hours a day in their cells, with little to no human contact for days or even decades. The sensory deprivation they endure causes severe psychological damage. These people are invisible to us—and eventually to themselves. (This is a virtual reality project featured as an installation for the first time.)
BUY TICKETS HERE.

The Return
Section: World Documentary Competition
Directed by Kelly Duane de la Vega and Katie Galloway, written by Kelly Duane de la Vega, Katie Galloway, and Greg O'Toole. (USA) – World Premiere.
How does one reintegrate into society after making peace with a life sentence? California's controversial and notoriously harsh three-strikes law was repealed in 2012, consequently releasing large numbers of convicts back into society. The Return presents an unbiased observation of the many issues with re-entry through the varied experiences of recently freed lifers.
BUY TICKETS HERE.

I Voted?
Section: Tribeca Talks: After the Movies
How do you know that your vote is recorded as intended in an election? After South Carolina candidate Alvin Greene overwhelmingly won the Senate Primary despite having not campaigned, a pandora's box of questions opened regarding the voting process—particularly in a digital age where we rely on computer systems to act with integrity despite the use outdated and unregulated technology.
After the movie: Writer/director Jason Grant Smith, executive producer Katie Couric, and more.
Date: Thursday, April 21
Time: 5:30 p.m.
Location: SVA 2
BUY TICKETS HERE.

Betting on Zero
Section: World Documentary Competition
Directed and written by Ted Braun. (USA) – World Premiere.
Allegations of corporate criminality and high-stakes Wall Street vendettas swirl throughout this riveting financial docu-thriller. Controversial hedge fund titan Bill Ackman is on a crusade to expose global nutritional giant Herbalife as the largest pyramid scheme in history while Herbalife execs claim Ackman is a market manipulator out to bankrupt them and make a killing off his billion dollar short.
BUY TICKETS HERE.

National Bird
Section: Spotlight
Directed by Sonia Kennebeck. (USA) – International Premiere, Documentary.
Sonia Kennebeck takes on the controversial tactic of drone warfare, and demands accountability through the personal accounts—recollections, traumas, and responses—of three American military veterans whose lives have been shaken by the roles they played in this controversial method of attack. Executive produced by Wim Wenders and Errol Morris.
BUY TICKETS HERE.

Prison Dogs
Section: Special Screenings
Directed by Perri Peltz and Geeta Gandbhir. (USA) World Premiere, Documentary.
Prison Dogs is a story of redemption, strength, fear, love, and dedication. In this wonderfully human tale, prison inmates, along with veterans suffering with PTSD, find a path to a second chance at life through their love and care of a puppy.
BUY TICKETS HERE.

The Argus Project
Section: Installations
Project Creators: Gan Golan, Raquel de Anda, Julien Terrell, Ligaiya Romero
The Argus Project is a trans-media project that directly intersects the public debate over police accountability. At the center stands a suit of tactical counter-surveillance armor embedded with body cameras that offers a simple question: "If the police wear body armor to protect themselves while in public, what must 'the public' wear to protect themselves from the police?" Video projections surround the suit featuring former officers, activists, and family members directly impacted by police violence, creating a space for a real conversation on police violence—one that our country desperately needs.
BUY TICKETS HERE.

• We All We Got, directed and written by Carlos Javier Ortiz. (USA) – New York Premiere.
In the wake of the Black Lives Matter movement and the country’s recent focus on youth violence, police brutality, and marginalized communities, We All We Got is an elegy of urban America, and an intimate portrait of the people affected by violence in Chicago.

• Auschwitz, directed by James Moll, written by Lorna Graham. (USA, Poland) – North American Premiere.
Auschwitz is synonymous with the Holocaust, but it’s also a place on the map with a surprising history preceding World War II. Narrated by Meryl Streep, this short documentary tells the story of Auschwitz, from its construction to its infamy.

• I Was a Winner (Jag var en vinnare), directed by Jonas Odell, written by Jonas Odell and Richard Dinter. (Sweden) – International Premiere.
Told through a mix of documentary interviews and animation, I Was a Winner shares three very different stories on the subject of computer game addiction. In Swedish with subtitles.

• We Are, directed by Joshua Shelov and Jay Bulger, written by Joshua Shelov. (USA) – World Premiere.
We Are chronicles Penn State's path from the 2011 scandal to the design of their new campus statue. Sculptor Jonathan Cramer drew inspiration for its creation from the 1948 PSU football team that overcame racial adversity with the mantra "We Are Penn State."

• Ocean Stories: Wyland, directed and written by Patrick Creadon and Greg Goggin. (USA) – World Premiere.
Energetic, charismatic, and creative, Wyland is best known for his 100 life-size whale murals found on walls and buildings around the world. The extent of Wyland's public artwork, his galleries, and his community service projects have made him one of the most recognized artists in the world.