A Sports Fanatic's Guide to the 2016 Tribeca Film Festival

From soccer icons to Black Lives Matter and classic underdog stories, these athlete-focused Tribeca 2016 films are all about the love of the game. 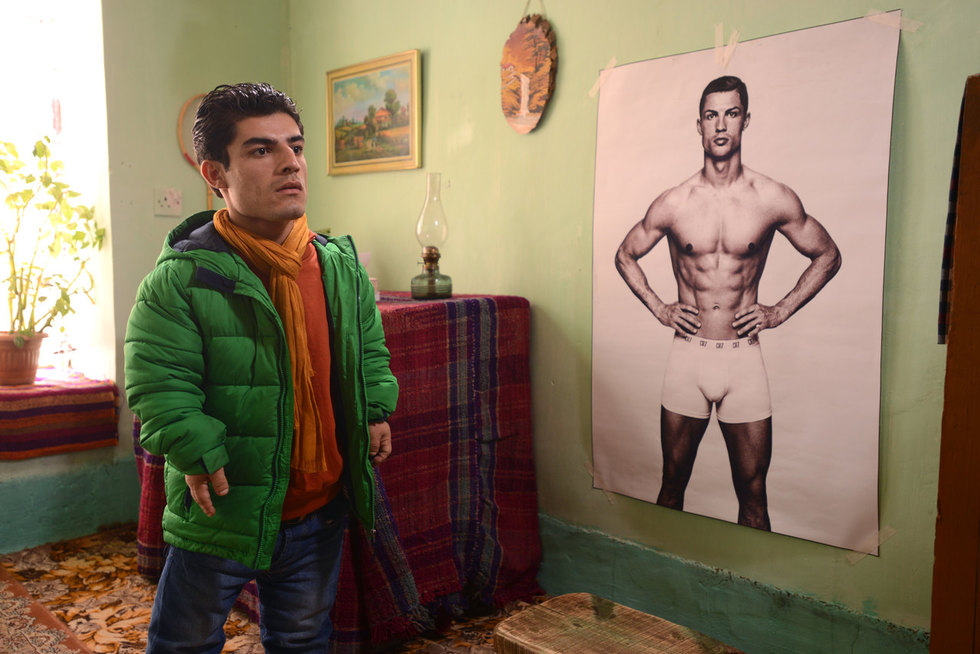 Fact: Sports fans eat, sleep, and drink ESPN’s programming, particularly the Sportscenter broadcasts, minute-by-minute scores and updates, and whichever 30 For 30 documentary happens to be airing at any given moment, since they’re all top-notch. Come April 13-24, though, sports junkies will have numerous reasons to turn off the tube, step foot outside, and enjoy some fresh air while en route to a variety of film screenings at the Tribeca Film Festival that are both ESPN-approved and credibly sporty.

For the 10th year in a row, the Tribeca/ESPN Film Festival will offer a plethora of intimate documentaries and entertaining sports-minded narrative flicks for NYC's game-time aficionados. The program's main gala event is the world premiere of This Magic Moment, a doc about Shaquille O'Neal and the Orlando Magic’s reign atop the NBA Eastern Conference in the mid-1990s. Co-directors Erin Leyden and Gentry Kirby's film will be surrounded by heavy-hitters like the soccer biopic Pelé: Birth of a Legend, the Aubrey-Plaza-led recreational hoops doc Pistol Shrimps, and a look at women's lacrosse in the Native American community (Keepers of the Game).

And none of that includes the narrative world premieres that'll turn sports junkies into makeshift film critics. See below for a complete breakdown of Tribeca 2016's sports-friendly programming.

Gala:
This Magic Moment, co-directed by Erin Leyden and Gentry Kirby. (USA) – World Premiere. Documentary.
In the mid-1990s, Orlando was the epicenter of excitement in the NBA. The young franchise, led by mega-stars Shaquille O'Neal and Penny Hardaway, beat Michael Jordan and the mighty Bulls en route to the 1995 NBA Finals. They lost to the Rockets that year but it was clear this team from Orlando was a dynasty in the making. But the Magic's moment on top was never fully realized, a classic "what-could-have-been" story, where success came fast and big and then "poof," the magic was gone.
BUY TICKETS HERE.

Keepers of the Game
Section: Viewpoints
Directed by Judd Ehrlich. (USA) – World Premiere, Documentary.
Lacrosse is a sacred game for Native Americans, traditionally reserved for men. When a women's varsity team forms in upstate New York, they aim to be the first Native women's team to take the championship title away from their rivals Massena High. With the indigenous community torn, they find that more than just the championship is on the line.
BUY TICKETS HERE.

Magnus
Section: Spotlight
Directed by Benjamin Ree, written by Linn-Jeanethe Kyed and Benjamin Ree. (Norway) – World Premiere, Documentary.
Carlsen is known as the "Mozart of Chess" because, unlike many chess grandmasters, he possesses innate ability, an unbelievable memory, and unrivaled creativity. Memorized moves and calculated probability can only carry a chess player so far; Magnus exploits this weakness in his opponents on his way to becoming the World Chess Champion. In English, Norwegian with subtitles.
BUY TICKETS HERE.

My Blind Brother
Directed and written by Sophie Goodhart. (USA) – New York Premiere, Narrative.
In Sophie Goodhart’s utterly original romantic comedy, Robbie (Adam Scott) is a champion blind athlete and local sports hero whose brother Bill (Nick Kroll) is always overlooked, even though he runs every marathon by his side. When both fall for the same lady (Jenny Slate), Bill must decide if he will put himself second again, or finally stand up to his blind brother. With Zoe Kazan, Charlie Hewson, Maryann Nagel, and Greg Violand.
BUY TICKETS HERE.

Pelé: Birth of a Legend
Section: Special Screenings
Directed and written by Jeff Zimbalist and Michael Zimbalist. (USA) – World Premiere, Narrative. From the slums of Brazil to center stage at the world’s biggest sporting event, Pelé's rise to become the youngest-ever World Cup winner, at the age of 17, was nothing short of a miracle. Full of laughs, life lessons, and heart, this inspiring biopic is perfect for introducing a new generation to the greatest soccer player of all time. With Vincent D'Onofrio, Rodrigo Santoro, Diego Boneta, Seu Jorge, Colm Meaney. An IFC Films release.
BUY TICKETS HERE.

Win!
Section: Spotlight
Directed and written by Justin Webster. (USA) – World Premiere, Documentary.
With inside access to the players, decision makers, and supporters who were central to the formation of New York City Football Club and its historic inaugural season, Win! offers a fascinating behind-the-scenes look at what it takes to build a Major League Soccer team from the ground up, in the country’s most competitive sports market. In English, Spanish with subtitles.
BUY TICKETS HERE.

O.J.: Made in America (ESPN Films) marathon miniseries screening
Section: Tribeca Tune In
Directed by Ezra Edelman
This is the story of O.J. Simpson, one of the most polarizing people of the twentieth century, and the city in which he lived for much of his life, Los Angeles. The film explores Simpson's rise and fall, centered around two of America's greatest fixations—race and celebrity. Screened in its entirety with breaks, food, and drink included.
Saturday 4/23, 11:00 AM, Regal 8
BUY TICKETS HERE.

O.J.: Made in America with Ezra Edelman and TheUndefeated.com
Section: Tribeca/ESPN Sports Film Festival Conversations, sponsored by Mohegan Sun
O.J. Simpson remains one of the most resonant figures in American history. Undefeated.com editor in chief Kevin Merida moderates a discussion with the film's director Ezra Edelman, managing editor Raina Kelley and senior culture writer Kelley Carter about ESPN Films' O.J.: Made in America and its attempt to make sense of both the racial context surrounding the trial 20 years ago, and a life and career still being debated today.
Date: Sunday, April 24
Time: 5:30 p.m.
Location: SVA 2

Wolves
Section: Spotlight
Directed and written by Bart Freundlich. (USA) – World Premiere, Narrative.
Anthony Keller (Taylor John Smith), star of his NYC high school basketball team, is riding his way to Cornell on a sports scholarship. He can only maintain his popular jock facade for so long, as his troubled father Lee (Michael Shannon) has a gambling addiction that threatens to derail his dreams both on and off the court. Bart Freundlich's powerfully directed drama co-stars Carla Gugino.
BUY TICKETS HERE.

The Phenom
Section: Spotlight
Directed and written by Noah Buschel. (USA) – World Premiere, Narrative.
When major-league rookie pitcher Hopper Gibson (Johnny Simmons) chokes on the mound, he's sidelined to the minor leagues and prescribed sessions with an unorthodox sports psychologist (Paul Giamatti). In the process, long-dormant conflicts with his overbearing father (Ethan Hawke) are brought to light. The Phenom is a captivating psychological study of an individual caught up in the expectations of the big-league sports machine.
BUY TICKETS HERE.

• Gonzo @ the Derby, directed by Michael D. Ratner. (USA) – World Premiere.
In 1970, writer Hunter S. Thompson and illustrator Ralph Steadman covered the Kentucky Derby for Scanlan's Monthly. The resulting article, "The Kentucky Derby is Decadent and Depraved," marked the beginnings of gonzo journalism. Gonzo @ the Derby looks at the article and the lasting impact on media and sports journalism.

• A.C. Green: Iron Virgin, directed by Isaac Feder. (USA) – World Premiere.
A.C. Green, Showtime Laker and reigning Iron Man of the NBA, doing the dirty work every night for 1,192 straight games—more consecutive games than any player in NBA history. But, it wasn't just his durability that separated AC from his NBA brethren: he was a proud virgin, who was saving himself for marriage.

• The Best Last Best Plane Ride Ever, directed by James Blagden. (USA) – World Premiere.
In October of 1986, the NY Mets beat the Houston Astros in the NLCS in one of the most dramatic series of the decade. This film recreates their post-game airplane celebration: three hours of unbridled chaos resulting in an airplane interior that was almost completely destroyed.

• Skateboarding's First Wave, directed by Don Burgess, written by Ed Buhr. (USA) – New York Premiere.
A look at the early days of skateboarding culture in Southern California, and the group of kids that would shape its role in media and society.

• 2 Fists Up, directed by Spike Lee. (USA) – World Premiere.
An examination of how the Black Lives Matter movement sparked activism at the University of Missouri, its football team, and across the rest of the United States.