What Makes VR and Immersive Storytelling So Special?

The Tribeca Festival was one of the first to champion VR, AR, and mixed reality in the entertainment industry. See how stories come to life like never before. 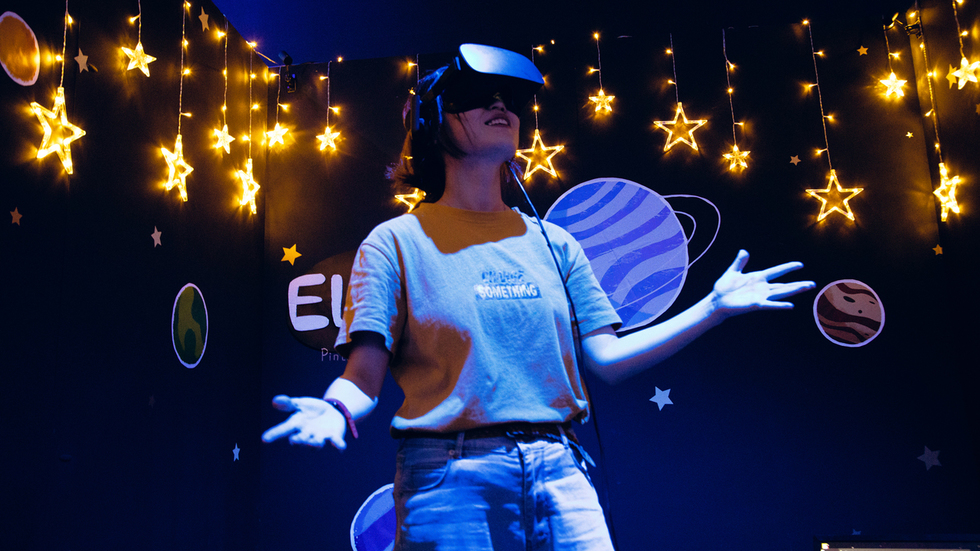 Imagine standing in New York City and then instantly journeying to the bottom of an ocean with a marine biologist. Or walking through a moonlit forest inhabited by a monster. Or getting a tour of Barack Obama’s White House from the former president himself. Or crash-landing on an unknown planet 300 light years from Earth with only a robot as your guide.

These unique experiences were all made possible thanks to the Tribeca Festival’s evolution in cutting-edge virtual reality and immersive storytelling. For nearly a decade, it’s become the premiere showcase for thrilling technology that allows creative thinkers and explorers to immerse and interact with the 360-degree world around them. All you need is the willingness to let go — and, on occasion, a headset.

“When you can go into a different place or a different space and feel something for the first time, it’s so exciting and powerful,” says director and visual artist Imraan Ismail. “And Tribeca has taken significant steps in expanding this storytelling.”

He observed this firsthand when The Protectors, a VR movie about a group of elephant-rangers that he co-directed with Oscar winner Kathryn Bigelow, made its world premiere at the festival’s 2017 edition. The pair’s Tribeca Talks: Virtual Reality event drew a surprise appearance from Hillary Clinton, who marveled onstage that “the virtual reality experience is so critical because it’s a portal you can go into.”

Tribeca’s multimedia program ignited in 2013 with the introduction of the Storyscapes section, a series of five experimental works that capitalized on interactive, web-based, and cross-platform approaches to visual creation. A year later, acclaimed directors Daniel Scheinert and Daniel Kwan introduced Possibilia, a non-linear film in which cast members made real-time choices onstage in front of a live audience. And in 2015, Jeremy Bailenson from Stanford University brought its Virtual Human Interaction Lab to the festival. For the first time, audiences could play quarterback for a football team and walk a mile in someone else’s shoes.

Eyeing the future, Tribeca’s one-of-a-kind Virtual Arcade opened in its Spring Studios headquarters in 2016. In one blank-canvas of a space, participants could be entertained and inspired with a range of adventures from animated epics to heart-stopping video games to post-apocalyptic landscapes. (Best of all: No quarters required to play!)

Festival goers have witnessed Emily Mortimer and Alessandro Nivola play a couple who discover a home intruder in Broken Night and heard Oscar winner Lupita Nyong’o voice a giant in Jack: Part One. For the John Legend-produced animated film Rainbow Crow, Constance Wu and Diego Luna voiced animals who want to save a forest. “I remember that the arcade was the focus of the festival,” Ismail adds. “You know it’s big when Bobby De Niro is walking through it!”

And no, not even a pandemic could stunt the medium’s growth: In April 2020, 15 VR films slated to premiere at the festival were instead made available via the Oculus TV app — including 1st Step, a 15-minute rendition of the Apollo space missions, and Dear Lizzy, a short piece co-produced by veteran VR filmmaker Chris Milk.

So, where do you want to go tomorrow and what story do you want to tell? And what is a story, anyway? With the Tribeca Festival supporting such boundary-pushing technology, the answers are endless. The festival returns to New York starting June 9th to celebrate its 20th anniversary. With outdoor screenings and socially distanced venues, #Tribeca2021 brings live events back to residents, and the new immersive lineup spans augmented, virtual, and mixed reality. Passes are on sale now; click here to join the celebration.