Willem Dafoe’s sizzling supporting performance as a crooked cop in ‘Out of the Furnace' has inspired us to delve into his early filmography looking for signs of what was to come. 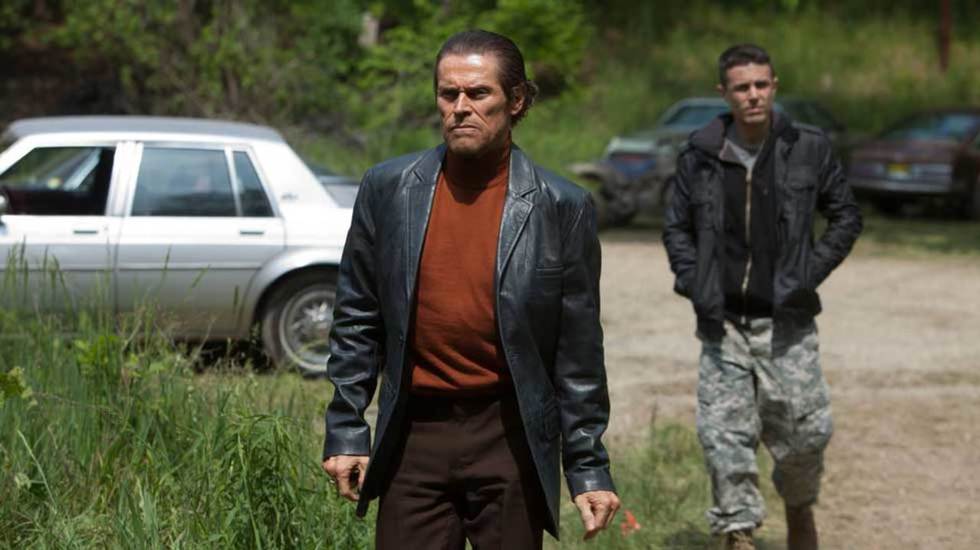 Arguably one of contemporary cinema’s great treasures, Willem Dafoe has been an on-screen force from the early days of his career. His Oscar-nominated-performance as Sgt. Elias in Oliver Stone’s Platoon (which we’ve purposefully left off this list) back in 1987 caused Hollywood to take notice, but lesser known roles before and after that career milestone are equally impressive.

These early roles gave Dafoe the opportunity to work with auteurs like Kathryn Bigelow, Walter Hill and William Friedkin and no doubt prepared him for his long and varied career. Now well into his 50s, Dafoe shows no signs of slowing down.

I’m a regular Joe. I’ve got an itch between my legs and an afternoon for a heart.

Dafoe got his first leading role at the age of 26 in Kathryn Bigelow and Monty Montgomery’s The Loveless. A throw back to the great 50s motorcycle movies, this film has Dafoe playing Vance, the restless, rebellious leader of a motorcycle gang who gets mixed up with the wrong girl at the wrong time in the wrong small town. Oozing a dangerous sexuality, Dafoe channels the air of a bad boy greaser—aimless, adrift and violent—against the backdrop of complacent middle America.

Finally, someone who likes to play as rough as I do.

Walter Hill’s cult classic, Streets of Fire, provided Dafoe with the first of his many villainous roles. The film is another 80s/50s fusion (complete with old fashioned Studebakers and neon lights) loosely based on the abduction of Helen of Troy in the Iliad. Dafoe plays Raven Shaddock, the vicious leader of The Bombers, a gang responsible for snatching singing sensation Ellen Aim during a performance and taking her back to their lair.  Ellen’s ex-boyfriend, Tom Cody soon comes to the rescue and eventually faces off with Raven in an epic fight scene. Clad in intimidating rubber overalls (like you’ve never seen before or since), Dafoe nimbly acquits himself in a battle with Cody that includes the clashing of sledgehammers!

You better try and shit 40 grand because I ain’t leaving without it.

In William Friedkin’s To Live and Die in LA, Dafoe plays Rick Masters, an artist who moonlights as a career counterfeiter and becomes the target of Richard Chance, an unhinged and relentless LA cop. While the movie is best known for its dynamic car chase sequences, Friedkin’s underrated classic (set to the music of Wang Chung) would not work without the lingering presence of Dafoe’s character. He plays Masters as a cold, cunning and ruthless operator in the seedy L.A. underworld who strangely prides himself on being a fair businessman. Full of contradictions, Rick Masters is one of the Dafoe’s most fascinating and defining characters.

Martin Scorsese’s religious epic, The Last Temptation of Christ, now hailed as a masterpiece, was extremely controversial at the time of its release. Adapted for the screen by Paul Schrader (the first of his many collaborations with Dafoe), Dafoe plays Jesus in the last few days before his crucifixion and resurrection. Unflinching in his portrayal, Dafoe humanizes the son of God in a departure from traditional approaches to playing the divine. His Jesus questions and struggles against his fate, even hallucinating a secular life with Mary Magdelene before bowing to the inevitable. Dafoe takes full command of the screen and turns in an intense and thoughtful performance.

Where does it come from, all this hatred?

Set in the 1960s, Alan Parker’s Mississippi Burning is a searing crime drama centered on an actual event—the disappearance of three young civil rights workers. Dafoe plays FBI Agent Alan Ward, one of Bobby Kennedy’s appointed men from the Justice Department, who partners with agent Rupert Anderson, a good old boy who utilizes force and intimidation in his own police work. Dafoe conveys the inner conflicts that beset Agent Ward when standard procedures are rendered useless by the racism and violence of the Deep South. Ward must adapt to Anderson’s style of police work to get results, and Dafoe provides a multi-layered performance as his character reluctantly begins to get his hands dirty and to change his perspective on acceptable means of fighting ingrained evil.

It was only a matter of time before David Lynch cast Willem Dafoe in a movie. In Wild at Heart, Dafoe plays Bobby Peru, an unhinged gangster, who delights in terrorizing Lulu and Sailor, a young couple on the run. Dafoe is at his most menacing in this Lynchian homage to the Wizard of Oz, complete with rotten teeth and a strange southern accent.  In one of the most terrifying and uncomfortable scenes in Lynch’s filmography (and that’s saying something), Dafoe as Peru brutally forces himself on Lulu, gleefully spouting perverse sexual come-ons.  When Peru takes a shotgun blast to the face later in the movie, you won’t be able to stop yourself from cheering.

Everybody wants to talk. It’s like a compulsion. My philosophy is: you got nothing to say, don’t say it.

Paul Schrader reteamed with Willem Dafoe for the urban drama, Light Sleeper. Dafoe plays John LeTour, the film’s hero who is a 40-year-old high-class drug dealer (and a reformed addict) who searches aimlessly for purpose. In one of his most complex performances to date, Dafoe embodies the listless John as he reconnects with his old girlfriend, Marianne, who inevitably draws him back into the dangerous underworld. World weary and consumed with sad reflection, Dafoe is never better in one of the most underrated films of the early 1990s.