The film comes at the height of pop culture’s fascination with all things transgender, following Caitlyn Jenner’s Internet-smashing Vanity Fair cover shoot and all of its subsequent debates and thinkpieces 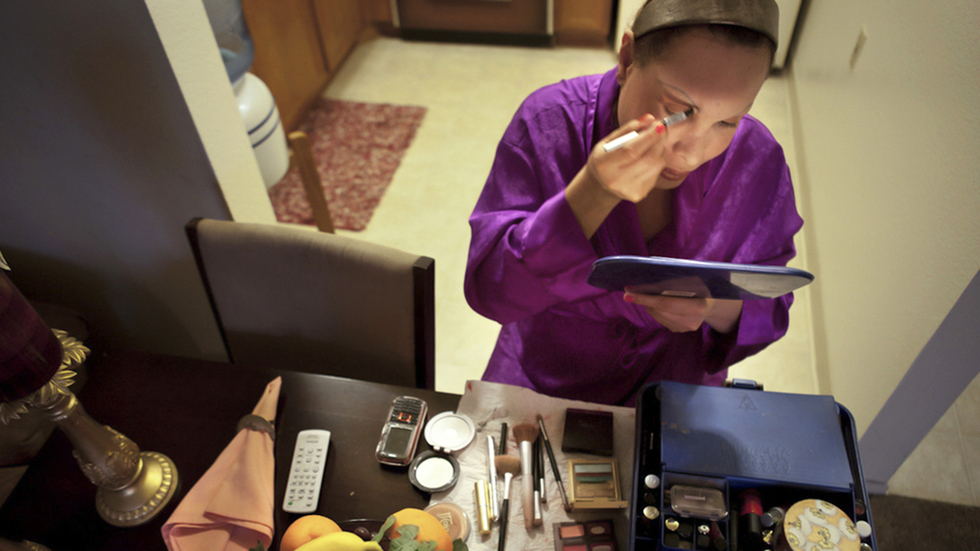 Four years ago, Isabel Castro was a junior at New York University's Tisch School of the Arts. Like all college students everywhere, she was balancing a heavy workload—but hers was exceptionally heavy. At NYU, Castro was grinding her way towards a B.A. in journalism and a B.F.A. in photography; outside of the classroom, she was pushing a hugely ambitious passion project into existence. While her peers were either relaxing or partying during their downtime, Castro was making a movie.

Even crazier, she was filming the movie across the country in Los Angeles. Born in Mexico, Castro had always been fascinated by how and why people from her native country relocate to the United States, since that's exactly what her family did when she was little. "My parents emigrated to the United States specifically because of job opportunities and, really, educational opportunities for me and my siblings," says Castro, 25, who's the oldest of three children. "I didn't live in Mexico for very long. I grew up primarily in the United States. Because of that, I was given educational opportunities that I probably wouldn’t have had in Mexico. I've really tried to capitalize on that. With this film, I'm trying to illustrate for people why immigration is such a necessary step."

And for the subjects in her film, they've been motivated by more than just better classrooms. Crossing Over: Stories of Immigration and Identity is an eye-opening look at the lives of three transgender women living in LA who've emigrated to the United States from Mexico. It's a side of Mexican emigration that was foreign to Castro before her mother introduced her to a family friend, a Los Angeles woman who works as an immigration lawyer. "I grew up in a very conservative Connecticut town where social issues like immigration are sometimes difficult to understand," says Castro. "My motivation in making this film was to put very personal narratives behind this discussion. I wanted people to see it, meet the characters, get invested in these characters and say, ‘You know what? Screw political motivations—these are people I'm invested in and empathize with."

One of Crossing Over’s subjects, Abigail, is a former prostitute who has to pay her way through school because her political asylum means no financial aid for her education; for an income, she helps teenagers prepare for their quinceañeras, a humble profession that doesn’t exactly bring in the big bucks. During production Abigail told Castro that she was ready to "leave it all behind" and return to Mexico. Shortly after, Abigail disappeared. Castro, meanwhile, was ready to march to "Pomp and Circumstance." "I'd lost touch with her and realized that she had left Los Angeles,” says Castro. “We had no communication with her at all. But then literally on the night of my college graduation, I got a call from her telling me where she was and what had happened. There were so many emotions happening at once that night. It was all very difficult to balance."

Castro’s determination has definitely paid off. After airing on Univision and Participant Media’s Pivot channel in December, Crossing Over—which has already won the GLAAD Award for Outstanding Documentary (Spanish Language)—will have its New York City premiere this week as part of the Lower East Side Film Festival.

For Castro, the LES screening will be a special kind of homecoming. Castro has lived in Brooklyn for the past six years, and for the last year, she's worked for HBO’s Brooklyn-based VICE team as an associate producer. "It’s an incredible learning experience," says Castro of the job. "[VICE is] fantastic at documenting and exploring both under-represented communities, geographies and stories in a very accessible way, and that’s ultimately all that matters to me: making topics that seem inaccessible accessible to people who I’ve grown up with, go to school with and currently live with. I want to make bigger topics conversational."

The VICE gig is a perfect fit for Castro, whose film mirrors the company’s intimate, all-access approach to documentary filmmaking. Crossing Over follows three transgender Mexican women—Francis, Brenda and the aforementioned Abigail—who’ve all relocated to America in hopes of finding cultural and societal acceptance but have been forced to endure through complicated immigration issues (i.e., the difficulties that come with seeking political asylum) and other people's inability to accept them on a human, not governmental, level. "Transphobia is definitely prevalent in our country, but when you compare it to other countries, it’s not nearly as big," says Castro. "In Latin American countries, like Mexico, there are things like machismo and much stronger patriarchies, so it makes sense that people would want to come to the United States to escape that and live in a way that they can pursue economic stability and educational opportunities independent from their gender identities."

Crossing Over's NYC unveiling comes at the height of pop culture’s fascination with all things transgender, following Caitlyn Jenner’s Internet-smashing Vanity Fair cover shoot and all of its subsequent debates and thinkpieces, and Castro is fully aware of that timeliness. Here, she discusses how and why Crossing Over is a must-see for anyone who's been unable to comprehend everything in our post-Caitlyn society.

Simplifying the Abstract
"Nobody's struggles are less or more valuable than others. This film covers a very niche and specific demographic: transgender immigrants. For people outside of that community, it can seem a little inaccessible or unrelatable, but the struggles seen in this film are universal. These women deal with loneliness, depression, wanting to be in a relationship and wanting to be loved—those are things that anyone can relate with. I wanted people who didn’t immediately empathize with or understand this very specific demographic to have a point of access into these people’s lives."

"There's a moment in the film where Abigail is watching TV alone with her dogs, and she talks about how being transgender makes it difficult for her to connect with someone. That’s something a lot of people can relate to—I know that I can certainly relate to that feeling, where you want love and you want to feel connected to the world around you. In showing things like that, and by forging relationships with these characters, it evens the playing field. These are really big issues that we’re grappling with—gender identity, transphobia and immigration are all a mouthful. They're things that people have very strong political or social stances about, but, fundamentally, the people within this demographic struggle with the same things that most of us do."

"This project informed what I now understand about community and interpersonal relationships. I met women who have endured so many more obstacles than I have but, at the end of the night, we're struggling with some of the same problems. That’s how I connected with these women, and it's what I ultimately wanted to convey with this film. These issues can be abstract, but there aren’t many things less abstract than seeing someone alone at night watching television with her dogs. Maybe you're not a transgender activist or an immigration activist, but you see that and feel it and empathize with it, and, hopefully, you want to explore it more."

It's Caitlyn Jenner's World, We're Just Misunderstanding It
"The biggest mistake that the media community makes as a whole is sensationalizing the transgender experience. There’s been a lot of conversations around Caitlyn Jenner and what it means to switch genders, but I wanted to discuss it and explore it beyond just purely aesthetic explanations or reasons. I wanted to go beyond physicality because I think the media is preoccupied with that. In the film, Brenda does a great job contextualizing why she's so concerned with appearances and aesthetic, and it’s because she's trying align the way that she feels with the way society perceives her."

Crossing Over: Stories of Immigration and Identity screens at the Lower East Side Film Festival this Wednesday night, 9:30 p.m., at Anthology Film Archives. Buy tickets here.