Home » Tribeca News » He May Not Be a Movie Star Yet, But Michael K. Williams Remains One of TV's Best Actors With HAP AND LEONARD
View All News

He May Not Be a Movie Star Yet, But Michael K. Williams Remains One of TV's Best Actors With HAP AND LEONARD

The brainchild of Jim Mickle and Nick Damici, two Tribeca alums, HAP AND LEONARD is a pulpy bliss for crime fiction lovers. It's also further proof that the man who's also known as "Omar Little" and "Chalky White" is a gift to television. 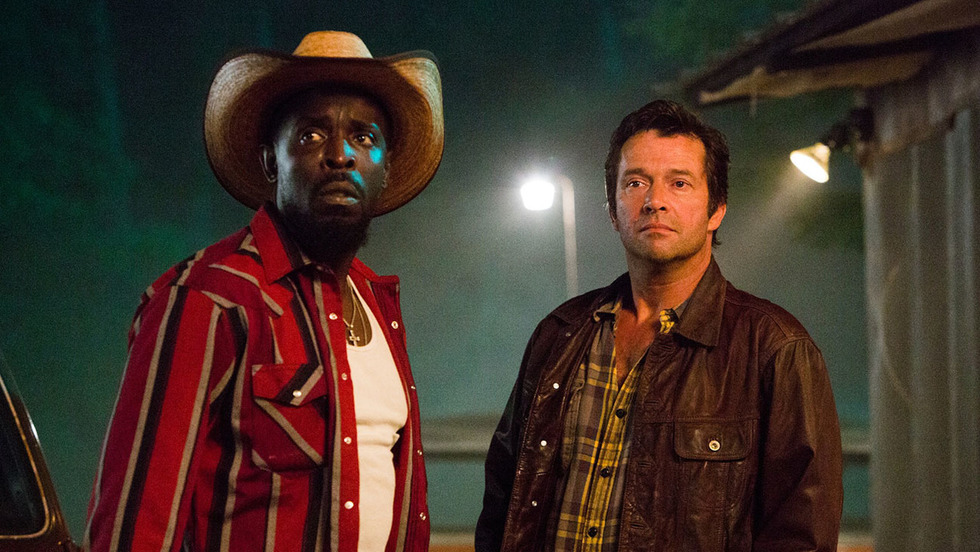 Michael K. Williams as "Leonard" and James Purefoy as "Hap" in HAP AND LEONARD (SundanceTV, 2016).

Less than three months into 2016, the year's best new TV show isn't FX's The People vs. O.J. Simpson, nor is it HBO’s Vinyl, although the latter's wildly ambitious Martin-Scorsese-directed pilot certainly reached for that high bar. It's SundanceTV's Hap and Leonard (new episodes air on Wednesdays at 10 p.m. EST), an accessibly lighthearted crime saga set in East Texas in the late 1980s and laced with dark humor, sporadic bursts of violence, and a homicidal maniac dressed like a WWE reject. Hap and Leonard is a thematic and tonal descendant of Justified, channeling FX's now-defunct critical darling's backwoods charm and shaggy-dog mettle through its two leads, James Purefoy (as Hap Collins) and Michael K. Williams (as Leonard Pine); they play a pair of lifelong buddies and professional crooks who get pulled back into law-breaking by Hap's old lover (played by Christina Hendricks).

Two episodes in, Hap and Leonard is a must-watch for numerous reasons, but the most exciting one is Michael K. Williams' superlative performance as Leonard, a complicated man who actively defies multiple stereotypes. Thanks to his Marine background, the Vietnam vet is as tough as they come, a physical bruiser and a verbal slasher who relieves stress by pummeling a boxing speed-bag and would most likely have more corpses to his name if not for Hap's calmingly familiar presence. Unlike the straight, white Hap, Leonard constantly has targets on his back in the eyes of the local Texas yokels because he's, A) black, and, B) gay. Even his elderly uncle demeans him by calling him a "faggot" in public and endlessly insinuating that Leonard's friendship with Hap must be sexual, when it's not. Folks like his uncle and the rednecks who asks questions about his blackness are why Leonard is a ticking time bomb. One wrong look could speed up the countdown.

Funny yet stern, sensitive yet capable of whopping anyone's ass with ease, Williams' Leonard is the kind of part actors dream of—especially an actor who can't seem to break through the Hollywood movie studios' limited casting lineups. Aside from the blink-and-you-missed-it period when he was up for Quentin Tarantino's Django Unchained, Williams hasn't matched the acclaim he's received in television dating back to the 2002 premiere of HBO's The Wire, on which he played the deadly homosexual stick-up killer Omar Little.

But when he does show up on the big screen, Williams doesn't waste a frame. Last month's starry crime thriller Triple 9 had many selling points, the chief of which were Kate Winslet's atypical villain role as a Russian gangster with a wonky accent and the fact that director John Hillcoat's featured Chiwetel Ejiofor, Casey Affleck, Woody Harrelson, Anthony Mackie, and Aaron Paul on the same jam-packed bill as Winslet. But none of the film's marketing touched on its secret weapon: a brief yet memorable appearance from Williams as a transgender prostitute named Sweet Pea. He's only in one scene, but it's Triple 9's high-point: Harrelson’s detective character meets Sweet Pea, who's one of his top informants, to get some info about a multiple homicide case. Williams expertly plays the exchange, matching wits with Harrelson, who's delightfully unhinged throughout Triple 9, whilst giving Sweet Pea an unsubtle flashiness and a slick arrogance. He makes you understand Sweet Pea's on-the-block stature without revealing a single piece of the character's backstory; he brings life and depth to an otherwise throwaway, exposition-spewing cipher.

Triple 9 is the latest entry into Williams' big-screen filmography that’s one-sidedly defined by "brief yet memorable" roles. The common trait shared between all of his film roles so far: In a mere ten minutes or less of screen time, he leaves you wishing his character were the film’s main attraction. Williams anchored one of the best scenes in Ben Affleck's 2007 directorial debut, Gone Baby Gone, intellectually and tactically sparring with star Casey Affleck in a pivotal lunch-table interrogation sequence that rivals anything Aaron Sorkin has ever written. He was equally terrifying and heartbreaking as the tragic thief in Hillcoat’s excellent 2009 adaptation of Cormac McCarthy's novel The Road. He was terrific as the militant Black Guerrilla Family leader "Tariq" in Paul Thomas Anderson's Inherent Vice. He exuded boss vibes and demanded a spinoff film while taking over The Purge: Anarchy's final act as resistance leader "Carmelo Johns."

Optimists might say that Williams' casting in movies like Gone Baby Gone, Inherent Vice, and Triple 9 are victories in and of themselves, since it’s tough enough for any black actor to land roles in major Hollywood movies. Realists, however, should be frustrated by Williams' marginalized film career. The current rise of the great Idris Elba only magnifies the issue—on The Wire, Williams and Elba gave two of the most impressive performances on any HBO original series ever, yet only one of them has been able to land on casting calls and wish-lists for franchises like 007, Star Trek, and Stephen King's The Dark Tower. As for Williams, he scored a small role in this summer's heavily anticipated Ghostbusters, playing FBI agent "Hawkins," and the likelihood of that character being on screen all that much more than Triple 9's Sweet Pea isn't high.

But you know who's probably not losing sleep over this situation, though? Michael K. Williams. For the 49-year-old actor, projects like Triple 9 and Ghostbusters are extra-curricular activities that complement his primary hustle: consistently being one of modern television's best and most underrated actors.

The Brooklyn native's formidable reputation began, of course, with The Wire, but Williams solidified himself as small-screen heavyweight on HBO's Boardwalk Empire, playing Chalky White, a regal gangster thriving in Prohibition Era luxuriousness while also combating the time period’s racial ignorance and segregation. Boardwalk Empire's strongest seasons and episodes were all Chalky-thick, particularly the character's two-season-long rivalry with Jeffrey Wright's Dr. Valentine Narcisse and the final season's remarkable "Devil You Know." Like The Wire's Omar Little, Chalky White allowed Williams to take full advantage of his greatest strength, which is his ability to find the humanity and vulnerability in dangerous men. The combination of that large scar on his forehead—received via another man's razor blade during a bar fight in Queens back in 1991—and his gruff voice lend Williams a natural ruggedness. Similar to Danny Trejo, he looks like someone who's been through life's ringer, and he's able to layer each of his characters, whether it’s an intimidator like Chalky White or the colorfully flamboyant Sweet Pea, with a lived-in authenticity.

For Danny Trejo, everything came full circle when Robert Rodriguez gift-wrapped the badass vigilante character Machete for him, allowing Trejo to utilize his God-given toughness and his sense of humor and unpretentiousness. And now, Williams has his own Robert Rodriguez—actually, he has two. In adapting genre fiction writer Joe R. Landsale’s series of pulpy Southern crime noir books starring the characters Hap and Leonard, indie filmmakers and Tribeca Film Festival alumni Jim Mickle and Nick Damici (We Are What We Are, Cold in July) have written the perfect character for Williams. Leonard provides a playground for the actor’s varied skill set: Williams gets to tap into Chalky White’s tough-guy nature while reconnecting with how Omar Little’s sexual orientation undercuts people’s perceptions, all of which joyously collides with the comedic timing he displayed in his brief turn as "Professor Marshall Kane" on NBC's Community.

Although they're two totally different types of actors, he and Purefoy have a wonderful chemistry as Hap and Leonard, steadily layering their arguments with as much mutual admiration and affinity as their playful banter. And Williams is clearly relishing every second spent within Mickle and Damici's rich, southern-fried-Raymond-Chandler world. He tears through all of its the charcoal-smoky dialogue with the naturalism of a lifelong Texan. After a plan goes haywire, Leonard aggressively scolds Hap with, "You actin' like this is the first time I've had to pull your ass out the fire—hell, I need oven mitts just to hang out wit' you." And then you remember that Williams is from Brooklyn. Hap and Leonard demonstrates that Williams knows acting range like, as one of the show's other characters says in its second episode, a "dog knows its own ass."

It's just too bad that movie producers and studio executives aren't as enlightened—and if they are, they have a funny way of showing it. Last week, Williams took part in a roundtable on Comedy Central's The Nightly Show, hosted by Larry Wilmore, to discuss the controversial casting of Zoe Saldana in the new Nina Simon biopic, Nina. The issue for many isn't Saldana’s acting chops, but, rather, that the Avatar and Guardians of the Galaxy star is light-skinned and has essentially been given blackface makeup in order to more closely resemble Miss Simone. "Do I think that someone in [Saldana's] camp should've maybe advised her to pass on this role? I agree,” said Williams. He followed that up with, "I don't think [the movie's producers] looked outside 'the room,'" referring to how Hollywood doesn’t look beyond the same handful of black actors when casting high-profile projects of Nina's kind.

He might as well have been talking about himself in regards to every leading-man role that goes to Will Smith or the future ones that will be offered to Idris Elba, David Oyelowo, Chiwetel Ejiofor, and every other black actor of English descent who's currently killing it in the American studio system. They’re all in "the room"; Williams is still being forced to knock on the door. But with each new Chalky White or Leonard Pine he adds to his resume, Williams makes that proverbial room look even more ridiculous.