The year's best independent films and classics from directors like Brian De Palma are set to make warm weather season that much hotter. 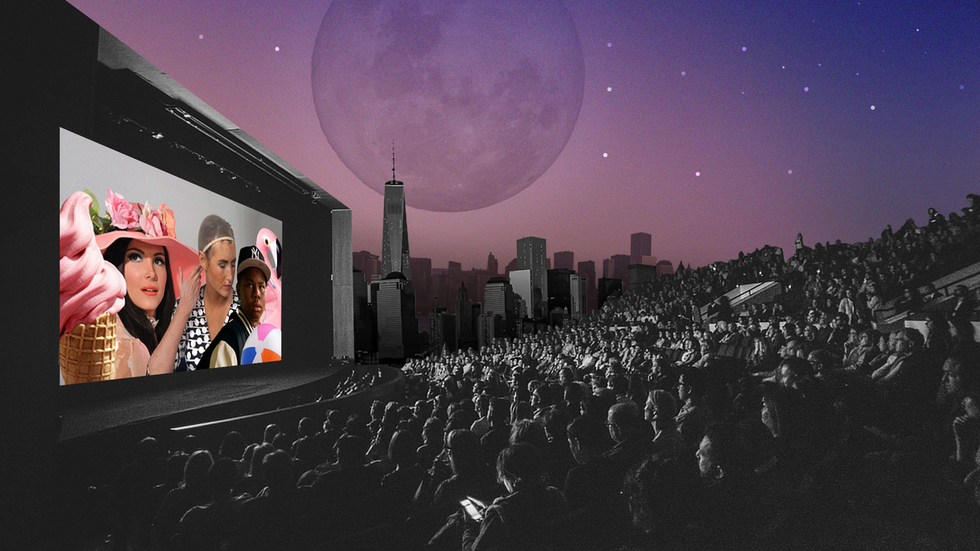 You'd think it'd be a time for serious New York City cinephile withdrawal. The 2016 Tribeca Film Festival ended less than a month ago, and there are still four months left until this year's New York Film Festival. Yet as any self-respecting NYC movie buff knows, film never sleeps in this city.

Over the next three months, the hot days and still-pretty-damn-hot nights of summer will keep New York’s film joneses satisfied post-Tribeca, and in a wonderfully varied assortment of ways. There's something for every kind of cinema aficionado, from weekend-long festivals dedicated specifically to short films, prestigious international series held at Lincoln Center, the year's best indie flicks shown on the tops of Brooklyn buildings, and killer repertory programs at theaters like Nitehawk, the Metrograph, and the soon-to-be-open Alamo Drafthouse in Brooklyn.

And we've compiled it all for you in this one handy summer 2016 guide to NYC’s can't-miss film festivals and screening series. As the season progresses, we'll continue adding onto this list, too. So bookmark it, Pocket it, or print it out and stick it to the nearest refrigerator. You won't want to leave home without it.

This year's lineup is stacked, with highlights including several killer short film programs, the dance-oriented psychodrama The Fits, the so-weird-it-has-to-be-true documentary Tickled, the New York concert memoriam Goodnight Brooklyn: The Story of Death by Audio, and Tribeca 2016 inclusions Life, Animated and Hunt for the Wilderpeople.

Click here for a complete breakdown of Rooftop Films' 2016 lineup and schedule.

In its first few months, NYC's newest repertory movie house has staked its claim with a serious vigor, programming some of the city’s best and most unique old-school cinema screenings. This summer, the Metrograph will continue its remarkable freshman run with a special Brian De Palma retrospective, pegged to Noah Baumbach and Jake Paltrow's excellent new documentary De Palma and showing 28 of the genre master’s films in glorious 35MM all throughout June.

Click here for the Metrograph's ticket and showtime info.

With its lengthy roster of short film premieres from upstart directors, the NY Shorts Fest is one of the city's hidden cinematic gems, gathering storytellers who you won't find at biggest festivals like Tribeca and Sundance but who are no less ambitious, genre-bending, and gifted. If you're looking to discover some truly untapped new voices, this is an ideal place to do so.

Now in its 16th year, the Film Society of Lincoln Center's Open Roads provides NYC folks the chance to meet the next Leone, Pasolini, Bava, Bertolucci, Argento, and/or Fellini. Fourteen films deep, the 2016 lineup includes a biopic (Call Me Francesco – the Pope), Italy's recent submission for the 2015 Best Foreign Language Oscar (Don't Be Bad), a Venice Film Festival winner (First Light), a film produced by the Dardenne Brothers (Long Live the Bride), and a porn-infused superhero oddity (They Call Me Jeeg).

Click here for the complete Open Roads lineup and schedule.

Also high on our radars: director Kim Rocco Shields' intriguing Love is All You Need?, which is set in a world where "homosexuality is the norm and heterophobia is common," and the wild-looking short Lightningface, starring Hollywood A-lister Oscar Isaac as a guy who loses his mind over the course of 20 unhinged minutes.

Since the LES Film Festival won't announce its full feature lineup until Thursday, May 19, it's hard to get a gauge on where this year’s edition stands. But it's worth noting that this always-provocative festival, which last year screened critically acclaimed documentaries like the transgender immigrants study Crossing Over, will have a jury headed by Ethan Hawke and Straight Outta Compton casting director Cindy Tolan.

One of NYC's best annual documentary platforms, the Human Rights Watch Film Festival honors its mission to celebrate the most socially conscious and politically stimulating non-fiction films with a crop of culturally diverse explorations. Los Angeles' gang world is analyzed through a group of hard-edged women in the excellently titled Ovarian Psycos; a young Afghanistan woman’s dreams of hip-hop stardom are suppressed in Sonita; LGBT issues are given a regional specificity in Inside the Chinese Closet; and a pair of Tribeca 2016 standouts delve into police brutality and prison life with Do Not Resist and Solitary, respectively.

Are you the kind of NYC movie lover who experiences intense FOMO while Sundance and SXSW are underway in January and March, respectively? If so, BAMcinemaFest should be your annual summer high-point. Collecting a wide array of those two festivals' best premieres, the Brooklyn Academy of Music’s first-class June series is the best way to experience Sundance and SXSW without dropping major coin on flights and hotels.

BAMcinemaFest's 2016 edition is, unsurprisingly, loaded with must-sees. Ira Sachs, who recently visited Tribeca 2016 to interview Andrea Arnold, brings his latest drama, Little Men, the BAM’s opening night; Todd Solondz's uniquely existential weirdness backs Greta Gerwig in Weiner-Dog; Brooklyn's indie actress of the moment Kate Lyn Shiel (Starz's The Girlfriend Experience) gives an amazing performance in the meta-documentary Kate Plays Christine; horror director Ti West gives the western genre a shot with In a Valley of Violence, starring Ethan Hawke and John Travolta; and The Alchemist Cookbook imagines what Evil Dead would look like if it were made by Jim Jarmusch.

While the aforementioned Metrograph is doing a great job of establishing itself as a repertory landmark in NYC, Brooklyn's Nitehawk Cinema has been exactly that for five years now. With its Saturday morning cereal-and-a-movie program, its exceptional midnight weekend screenings, high-cuisine menu, and varied selection of booze, Nitehawk gives Brooklynites the kind of experiential and cinephile-friendly movegoing experience that was once unique to Austin's Alamo Drafthouse and Los Angeles' The Cinefamily and New Beverly.

Next month, Nitehawk will toast to its 5th anniversary with a yet-to-be-announced slate of special screenings and events. Expect it to be the borough’s coolest weeklong June party.

Co-presented by Subway Cinema and the Film Society of Lincoln Center, the 15th edition of the New York Asian Film Festival is fittingly anchored by 15 feature films. For horror fans, there's Creepy, the new Hitchcock-if-he-were-in-a-mental-asylum Japanese thriller from Pulse director Kiyoshi Kurosawa, and The Priests, a South Korean exorcism freak-out complete with demonic piglets. And for those who can appreciate a wholly original concept, there's Apocalypse Child, which imagines that Francis Ford Coppola left an illegitimate kid and a surfboard in his wake after the Philippines-set production of Apocalypse Now.

Once Nitehawk Cinema's 5th anniversary celebrations are over, its programmers are going to have their hands full trying to prep for the downtown Brooklyn arrival of a new Alamo Drafthouse theater. The Alamo chain, originally based in Austin, Texas, and now spread out across the country, is the Rakim to Nitehawk's Nas, the O.G. purveyor of beer-and-food dining, pre-show cartoons and old genre movie trailers, and party-like screenings of sleazy 1970s and '80s filmic curiosities. The new BK Drafthouse will have seven screens and, word has it, will feature Austin-started weekly signature series like "Terror Tuesday" and "Weird Wednesday."